Going to Heaven, Piece by Piece

Going to Heaven, Piece by Piece

Over the course of thirty-four years as an Orthodox priest, I have visited countless people with varying degrees of sickness—some with curable ailments and others with grave diseases. Each visit presented me with an opportunity to witness not only human anxiety and frailty but also heroic and steadfast faith. Each visit, as well, magnified my own fear and revealed my own paltry belief in God, teaching me valuable lessons. Two such visits still stand out in my memory: my first trip to a nursing home, and going to see a diabetic named “Alex.” 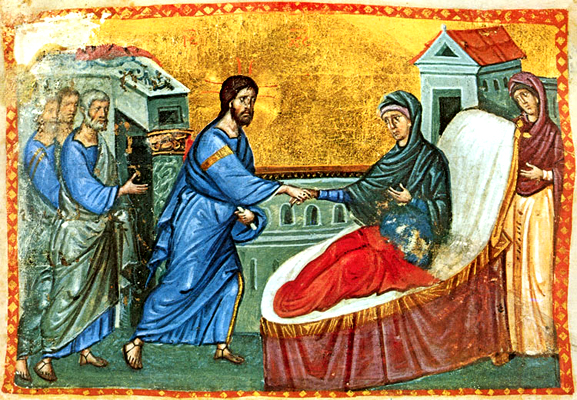 Impressions of my first visit to local nursing home as a newly assigned pastor in Binghamton, New York, remain fresh. Infirm and abandoned, their own names lost amid their decaying neuro-pathways, the “residents” would continually call out for help—but would receive no response. Confined to wheelchairs and beds, they hungrily sought acknowledgement of their presence, searching for someone to talk to within their shrinking world. Dumbfounded, young, and unsure of how to handle this mass of feeble humanity, I found that just uttering a prayer for my parish members who resided there elicited attempts on their part to make the sign of the cross. Many years later (and, in helping to care for my own 94-year-old mother), I would become quite comfortable conversing with—yes, and sometimes even feeding—elderly friends and parish members, but the atmosphere of that first visit had shattered my comfort zone, and upon leaving the nursing home, I horrifyingly reflected: “Steven, will this be your fate also?”

My own fear about becoming ill, old, and dying leaped from my psyche into my cerebral cortex. I was equally human; I was subject to death. Lesson One.

My visit to Alex, an elderly parishioner who had suffered for decades from severe diabetes, was equally striking. Alex was preparing to undergo a leg amputation (just below the knee), so I visited him in the hospital to hear his Confession and to give him Holy Communion. Amputations were not new to Alex: because of his disease, he had undergone many of them over the years. But, he faced this particular one with actual humor, despite great physical pain and emotional grief. He greeted me by saying, “Father, here we are again. I think I am going to heaven piece by piece.” I didn’t know whether to laugh or to cry. I remember doing both, as I glanced at his well worn (indeed, nearly shredded prayer book) on his bedside stand.

My own faith was miniscule compared to the solid faith Alex had developed through prayer and suffering. It was true: faith the size of a mustard seed could grow into a flowering, oversized shrub, when watered with constant prayer and steadfast loyalty to God. Lesson Two.

Over the last two years, I underwent three major surgeries, one of which took me to the brink of death. Post-surgery for the most serious operation, I spent twenty-one days in the hospital and an entire summer in recuperation. During that long hospital stay, I increasingly sensed that I was becoming “institutionalized,” influenced negatively by the rhythms of hospital routine: each day seemed like an eternity, and I wondered if I would ever get home. My ties to “home” were coming unlashed.

Visits from family and friends eased my discomforts and the anxieties. They brought a sense of normalcy and hope. They brought news from the world outside. They gave me an opportunity to laugh. They gave me permission to talk about my trials and to weep. They listened to me recount the details of my “surgical stories” time and time again.

Being one of the sick and the suffering taught me even more invaluable lessons: visits from fellow human beings are healing; just the presence of another human being is healing. Most noteworthy of all, I eventually learned that the “visitor” and “visited” become “Christ” to each other. Jesus’ words (paraphrased), “…when you have done so to the least of the brethren, you have done so to Me,” now take on new meaning: for, when we are in the role of the “Visitor,” we are in the guise of Christ coming to the needy; likewise, when we ourselves are the “Visited,” we are equally in the guise of Christ, in the image of His humanity.

Truly, these visits thus contain a mystery about them, in which divine grace penetrates the most humble of human conditions. Yet, visiting the sick is not an easy thing to do; the “waters are deep.” But our Lord is there in the depths — present in us and present in those whom we visit. Therefore, we need not shy away from such visits, due to discomfort or fear.

As a seminary student, as part of my theological education, I had been required to make only few hospital visits during my senior year. (Now, incoming students at my alma mater, I am happy to report, are required to fulfill 400 hours of hospital work under the supervision of a Clinical Pastoral Education (CPE) supervisor, thus earning 1 full credit of CPE). It took me a long time and repeated visits to learn how to minister to the sick and suffering in an effective manner. It took time to grow accustomed to sights, smells, and sounds. It took time for me to learn active listening skills instead of digressing into self-absorbed talk or flippant verbiage about the weather, or last night’s baseball game. To become better at being a “visitor to the sick,” I even underwent two years of training at Onondaga Pastoral Counseling Center in Upstate New York. Little by little, I was able to overcome awkwardness in body language and dialogue.

Such formal training, although certainly extremely helpful, is not always possible. If we lack the opportunity for formal training, humility and faith can go a long way in equipping us to minister to the sick and needy. Clearly, in the Gospels, Jesus calls all Christians to visit the sick, suffering, and the forgotten. Each time we make the effort to do so, we have the opportunity to become “Christ” to others, in ways we can’t explain and unbeknownst to ourselves. What a privilege it is for us to have the possibility to imitate His compassion and to let His compassion flow through us. If we accept His bidding, such ministry to the sick and the suffering will unite us to Him. In both the “Visited” and the “Visitor,” He is present; therefore, our human “presence” to each other is astoundingly significant.

Scripture tells us that God has “visited and redeemed His people” in the person of His Son, Jesus Christ, who came to us when we were sick with sin, overcome in darkness, and dead to real Life. Scripture further tells us that Jesus was not only concerned with our ultimate salvation, but that He was also concerned with “the cripples, the deformed, the blind, the mute, and many other besides” (Matt 15:30). In other words, Jesus’ ministry was directed to each unique person; after all, He “knows the name and age of each, even from his mother’s womb” (Liturgy of St Basil the Great). God’s Word also informs us that Jesus came bearing our burdens and experiencing woes. He came both as Healer and as One willing to suffer; all of us can choose to imitate Him in the former, and all of us will ultimately involuntarily imitate Him in the latter.

Visiting the sick and the suffering affords us so many necessary lessons as Christians. Let us wade into these deep waters, where we find none other than Christ Himself.

Source: The official blog of the Department of Youth, Young Adult, and Campus Ministries of the Orthodox Church in America