Source: Fr. Peter Preble's blog
It is very true that if we as leaders, do not have followers, then we are in fact out for a walk. I would also say the same is true. If we followers do not have a leader then we will wander around in a circle.
Priest Peter-Michael Preble | 06 April 2014 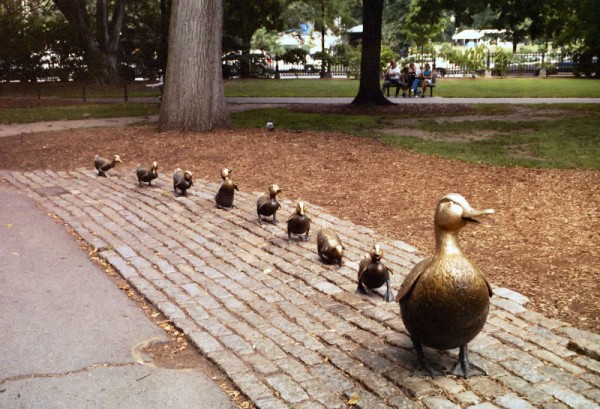 One of the classes I wish they taught us in the seminary was a course on leadership.  Unlike some of my classmates in the seminary, I have had an advantage of studying leadership.  You see I spent twelve and half years in the United States Army and the Massachusetts Army National Guard with more than half of that as a noncommissioned officer.  One of the first leadership lessons you learn is that to be a good leader you must first be a good follower.

I was blessed to have worked for some fantastic leaders during my time in the military but there is the flip side as well, the bad leaders.  I would say that some people are born to be leaders but most need to learn to be leaders.

Anyone involved in leadership will tell you that good leaders are also good readers, and I do read many things by many different authors about leadership both secular leadership and religious leadership.  There are some differences but there are more similarities.  It is not easy to lead the fortune 500 company nor is it easy to lead a church in this very complex world that we live in.

During my daily reading I recently came across this web site called Changing Minds.  On that site was a list of the Five Reasons to Follow a Leader.  I have adapted them for this essay and they are presented  in no particular order.

1.  We follow because we are afraid of retribution.  We follow the person who is in charge because if we do not there could be consequences for our career and our paycheck.  From my own perspective I can see the point of this one, but a good leader would have people following them without needing to threaten people.

3.  We follow because we have faith in the leader.  Like I said at the start I worked for some great leaders in the Army.  I would follow these guys literally into battle, I trusted them with my life. However that faith can also blind us to the fact that they might be leading us down the wrong road.

5.  We follow because we buy into the vision.  One of the very first books I read after my ordination was the Purpose Driven Church by Rick Warren.  This book really opened my eyes on how to motivate people to move them from point a to point b after all this is what we do when we lead.  In this book he stressed that the people need a vision and with no vision they are likely to follow anyone who comes along with a good idea, the blind hope!  As leaders we must craft and sell the vision to those who will follow, I have learned that this is much easier if those we are leading have some say in the vision and the direction.

I liked the TV show West Wing when it was on a few years back.  In one of the episodes the Vice President is speaking with the Chief of Staff, I cannot remember the context of the conversation, but as the VP was walking out of the office he turned and said, “You know what you call a leader with no followers, just a guy out taking a walk.”  Now I am sure that quote comes from someplace but I heard it in West Wing.  It is very true that if we as leaders, do not have followers, then we are in fact out for a walk.  I would also say the same is true.  If we followers do not have a leader then we will wander around in a circle.

If we ever hope to be great leaders, like the ones I followed, then we must be able to follow.