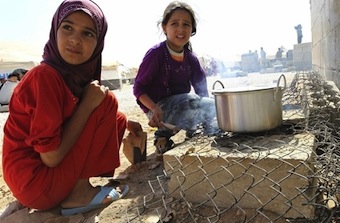 Despite a crushing economic crisis, Greece has given 50,000 euros ($66,325) to UNICEF to help Syrian children at the Zaatari Refugee Camp, where many Syrians are being housed after fleeing the country’s civil war.

Helping refugees, especially children, remains a priority for the country, Greek Ambassador in Amman Iraklis Asteriadis said after signing the donation agreement.
“Several times in our history, Greeks were refugees and we know the feeling of being a refugee,” Asteriadis said. “It is a very difficult situation and the Jordanian authorities launched an appeal recently, and several countries responded to the appeal.”

He said that, “We are doing our best to help children there, and we hope we are in a better position to do more,” he added, noting that the donation came in response to appeals from both the government and Greek Orthodox Patriarch of Jerusalem Theophilos III.

UNICEF country representative Dominique Hyde said the donation would provide children in the Zaatari camp with winter clothes and shoes to keep them warm during the winter as well as hygiene kits for babies. “UNICEF continues to support refugees in northern Jordan to cope with winter, which will be particularly harsh for children,” Hyde said. “The cold has already hit Jordan and over 20 per cent of refugees in Zaatari are children between zero to four years old.”

Hyde added that, “UNICEF’s response includes warm clothes for children, hot water for showers, and winterised tents for child protection spaces and schools,” she added, noting that over 2,000 women in the camp are about to give birth and “We are investing in this.” Ironically, the Greek government has done relatively little to help Greek children whose parents are unemployed and can’t afford heating oil.