By the President of the United States Of America

Each year, America celebrates Greek Independence Day to strengthen the bonds between the birthplace of democracy and the world’s oldest republic. We recognize the enduring contributions of Greek Americans, woven into the fabric of our national life. And we reflect on the ancient Hellenic principles that inspired our Founders to vest the powers of government in the hands of the people. 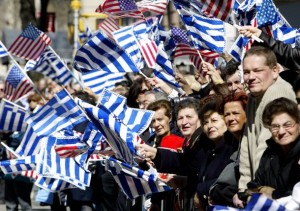 In both America and Greece, we are inheritors to great republics, entrusted to safeguard the ideals that make representative government work. Our peoples have learned that democracy flourishes when we respect our differences, hold fast to the principles that unite us, and move forward with common purpose. It is a legacy lived by generations of Greek Americans, who for centuries have helped write proud chapters in our country’s history and continue to enrich the character of our Nation.

Today, we congratulate Greece, a valued NATO ally, as it commemorates the 192nd anniversary of its independence, and we pledge our continued solidarity as the country works to rebuild its economy. In the face of hardship, America stands with the people of Greece, confident they can meet the challenges of the 21st century while upholding their ancient ideals.

NOW, THEREFORE, I, BARACK OBAMA, President of the United States of America, by virtue of the authority vested in me by the Constitution and the laws of the United States, do hereby proclaim March 25, 2013, as Greek Independence Day: A National Day of Celebration of Greek and American Democracy. I call upon the people of the United States to observe this day with appropriate ceremonies and activities.

IN WITNESS WHEREOF, I have hereunto set my hand this twenty-second day of March, in the year of our Lord two thousand thirteen, and of the Independence of the United States of America the two hundred and thirty-seventh.