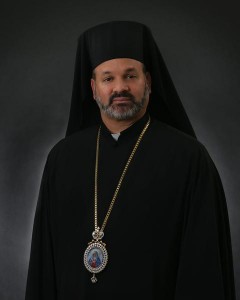 Bishop Demetrios of Mokissos, chancellor of the Greek Orthodox Metropolis of Chicago. Photo by: Provided

Greek Orthodox church leaders are hoping state legislators will pass a resolution calling on Turkish officials to “loosen up on their secular stronghold” and allow for more religious freedom abroad.

The “mother church” of Orthodox Christians and the Patriarch of Constantinople, the spiritual leader of the church, are stationed in Istanbul. The setup is not unlike the Vatican and the Pope of the Roman Catholic Church in Italy.

The Turkish government imposes restrictions on the church: It requires that the Ecumenical Patriarch be a Turkish citizen, and it does not recognize the Patriarch’s worldwide constituency.

The government also does not give the church any legal identity, which means the entity cannot own any property — even its own churches. The church is unable to train new clergy in Turkey, and its theological school was forcibly closed by the Turkish government.

Spokesman John Ackerman explained it this way: Imagine if the Italian government announced it was seizing all the property of the Roman Catholic Church and that, from now on, the Roman Catholic Pope would be required to be Italian.

“The world would be in an uproar,” Ackerman said. “That would not be permissible, and that’s what our faith has been living with.”

Bishop Demetrios, the head of the Metropolis of Chicago that has 34 parishes in Illinois and another 24 across Wisconsin, Minnesota, Iowa, Indiana and Missouri, said the Turkish government has taken some steps to “loosen up” on its regulations. About 360 acres of seized land and an orphanage were recently returned to the church, but there is still much more work to do.

“We have been making positive steps, and the government has been receptive,” the bishop said.

The bishop’s visit to Three Hierarchs Greek Orthodox Church in Champaign on Sunday is only about a once-per-year event, and it preceded Wednesday’s feast of the Three Hierarchs, the church’s namesake. After visiting the church, he was scheduled to visit students at the Orthodox Christian Fellowship on the University of Illinois campus.

Across the country, 42 states have already passed the resolution that Frerichs said he plans to support. A 2007 resolution in Illinois passed the House of Representatives but was never called for a vote in the senate.

Ackerman attributed the stall to confusion among state senators as to what the resolution was actually about, and he hopes a better awareness campaign will help supporters avoid that problem a second time.

Frerichs said he has little doubt that the resolution calling on the Turkish government to remove barriers to religious freedom should pass this time.

“If we claim to support religious freedom, then we should support it abroad as well,” Frerichs said.