Source: Greek Reporter
A. Makris | 21 October 2015
President of the Hellenic Republic Prokopis Pavlopoulos on Sunday stressed the need to end sources of conflict in the Middle East and deal with the region’s refugees, as he received members of the International Secretariat and Committee Chairpersons and Rapporteurs of the Inter-parliamentary Assembly on Orthodoxy (IAO) at the presidential mansion. 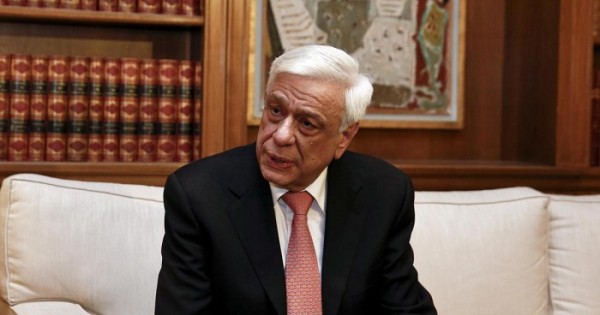 “One understands how important the message of Orthodoxy is today for Europe and the entire world, when there are even in our country phenomena of humanitarian crisis and hotbeds of war, especially in the Middle East, that create waves of refugees that must be dealt with from the standpoint of protecting human worth,” he said.

Pavlopoulos noted that, since 1993, the IAO has contributed greatly to the formation of the European architecture built on three pillars: ancient Greece, through freedom and culture, Rome, through the state and justice, and Christianity, including Orthodoxy, through the values of solidarity and social justice.

Greek Deputy Foreign Minister Yiannis Amanatidis, the IAO general secretary, assured him that the IAO was making efforts to stop the disastrous repercussions of wars in the surrounding region, while IAO Chairman Sergey Popov stressed that its members strenuously defend the ideals of Christianity and Christian values.

The members of the IAO are currently in Greece to attend the International Conference on “Religious and Cultural Pluralism and Peaceful Coexistence in the Middle East” organised by the foreign ministry, which is taking place in Athens, October 18-20.