Mission, supported by the Greek Orthodox Church is organizing food banks at the church of Agii Apostoli in central Athens. Every day more and more Athenians are queuing to receive food. 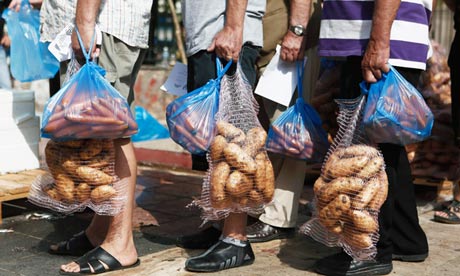 According to euronews, the Greek Orthodox church supported Non-governmental Organisation (NGO), Mission, distributes food daily to Greeks who have been hit by the economic crisis and austerity measures, and who are struggling to feed themselves and their families.

Father Isidoros who was present at the food distribution said, “The volunteers are eager and motivated to help people who are in need. Any one of us could be in their place tomorrow, could be in need in the near future. We must think of society as a net, and when this net breaks we are all in danger.”

The most recent surveys carried out in Greece show that 34.6% of the population lives in poverty, 10% higher than the EU average. Unemployment continues to rise and there is no sign of any change in this trend in the near future. Furthermore, the survey showed that 14.1% of households in Greece live in constant fear of loosing their main source of income.

Euronews reporter Theodora Iliadi said, “these are ordinary people. People who have lost their jobs and have had their lives turned upside down. More and more Greeks are facing severe financial difficulties and are having to increasingly rely on help provided by the Greek Orthodox church through their NGO, Mission. Thousands of people will celebrate Christmas with special meals that are being delivered over the coming days.”