Halki may be used as library, Metropolitan says 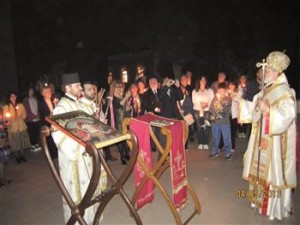 Metropolitan Elpidophoros Lambriniadis (R) leads the night ritual during the Easter celebrations held on the Heybeliada Island, close to Istanbul.

Heybeliada Halki Seminary, the religious school that has remained closed for 42 years, could be used as a library for research, conferences and studies if the government will not reopen it as an educational institution, Metropolitan Elpidophoros Lambriniadis has told the Daily News.

The statement came one day before an extraordinary Easter celebration on the Heybeliada Island close to Istanbul.

“Since our respected government has not made the decision to officially reopen our school as an educational institution, we decided to do so in another way,” Lambriniadis told the Daily News over the weekend.

“We will open the school as a monastic brotherhood, as a meeting place, a place for research in the library, place for conferences, hospitality, and study,” he added.

“Everybody is welcome to join us, whatever his/her nation, religion or language might be,” he said.
Agias Triados Church, a part of the Halki Seminary, witnessed a landmark Easter ceremony with consulate generals from 14 countries gathering at the school.

“This idea was born last year, when some Consul Generals of Orthodox countries came to Heybeliada and did the same thing, with lower numbers of participation, of course. The success of last year gave rise to the idea of extending the event this year, by inviting more people,” said Lambriniadis.

Turkish Prime Minister Recep Tayyip Erdoğan and Cabinet ministers have repeatedly said that the seminary could be opened but no bold steps on the issue have been taken yet.

The opening of the seminary has turned into an international issue with the U.S. State Secretary John Kerry calling on Turkey to reopen the school in his visit to Istanbul last month.

A draft resolution calling on Turkey to facilitate the reopening without condition or further delay has been submitted to the U.S. House of Representatives earlier this month.

The issue was discussed during talks in Ankara on Feb. 25 during which GermanChancellor Angela Merkel and Erdoğan met with various spiritual leaders, according to sources.

Most viewed articles
Last Man Standing175
Metropolitan Hilarion Speaks on Whether It Is Possible for ROC to Reunite with Old-Believers128
Saint Macrina the Younger as a Model for our Lives112
Christ Forgives and Heals98
Metropolitan Onuphry: People Get Strength for Life and Salvation in the Church54
Turning Trials Into Hope50
Businessman Buys a 19th Century Church and Returns It to the Faithful46
The Temple of Woke: Are Universities Basically New ‘Religious’ Training Centers?1
Most popular authors
Pravmir.com team231
Archpriest Geoffrey Korz175
Protopresbyter Fr. George Papavarnavas112
Fr. Theodore Stylianopoulos98
Fr. James Guirguis50
Eric Hyde1