Halki Seminary to undergo status change to allow for reopening 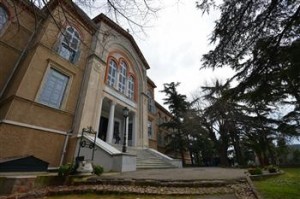 Over 900 students have graduated from Halki, with 12 of them ultimately becoming the Istanbul Greek patriarch. Daily News Photo/Emrah Gürel

The Halki Greek Orthodox seminary on Istanbul’s Heyebeliada island will revert to its pre-1971 status as part of an indirect method of allowing the long-closed clerical school to reopen while avoiding constitutional regulations on private institutions, according to daily Radikal.

The seminary’s reopening, which has been an ongoing point of debate for years, may be achievable once its higher education status reverts to its previous state as part of a new democracy package, meaning the school will fall outside of constitutional limitations on private universities.

The Turkish Constitution at the time banned the opening of private universities, which also included Halki, due to its higher education status. Officials have objected to the decision, stating that the school was a high school where graduates will proceed to the priesthood and not continue to any other kind of university.

The reopening of the school has been postponed due to a lack of clarity over its status, as well as the principle of reciprocity with Greece, which has refused to allow Turkish minorities to elect their own religious officials. According to the terms of the Lausanne Treaty of 1923, Turkey and Greece are bound to treat their respective minorities with reciprocal rights, meaning that every implementation regarding the Greek population in Turkey and Turks in Western Thrace should be equal.

If the new package succeeds in altering the current private education institution regulation, the change may pave the way for the opening of Halki, according to Radikal.

Over 900 students have graduated from Halki, with 12 of them ultimately becoming the Istanbul Greek patriarch.

The new package, however, will not alter the much-debated Article 301, which calls for the punishment of insulting Turkishness or Turkish people, despite earlier reports. The election threshold will also remain untouched, daily Radikal reported.