Hamblin & Peterson: The holy light of Easter in Jerusalem 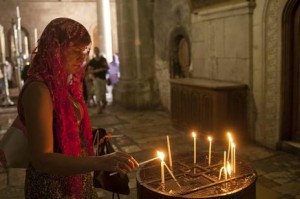 Woman lights candle in the Church of the Holy Sepulchre in the Old City of Jerusalem.

One of the oldest rituals in Christendom is enacted each year at the Holy Sepulcher in Jerusalem, the traditional site of Christ’s burial and resurrection, on the Saturday before Orthodox Easter — which falls, this year, on May 4. In the morning, the clergy of the four eastern Christian churches — Greek, Armenian, Coptic and Syriac — gather in the Church of the Holy Sepulcher.

All lights in the cathedral are extinguished. Dressed in splendid priestly robes and carrying crosses, banners, relics, censers and liturgical books, the Greek Orthodox priests and monks circumambulate the tomb in a grand procession, chanting hymns and reciting passages from the four gospels. Thousands of eastern Christians gather for the ceremony, each holding bundles of thirty-three unlit candles, symbolizing the thirty-three years of Christ’s earthly life.

Hundreds of Israeli police and soldiers block all roads leading to the Holy Sepulcher, attempting to limit the numbers entering the cathedral. Shouts and arguments can occur as irate worshipers demand to know why they’re not being allowed to go to their church and pray. No answer is given. Some, desperate to see the ceremony, might be physically restrained and carried off by the police. Ingenious pilgrims nonetheless sometimes find a way. With the aid of helpful monks and priests, some make their way through back doors of monasteries. Others, finding the road blocked by police, enter a corner store by a door on one side of the roadblock, exiting by an alternate door on the other side and quietly joining a procession of priests.

The cathedral is always filled with worshipers, overflowing into the large courtyard where hundreds wait for hours in the hot noon sun. The Greek Orthodox patriarch of Jerusalem is divested of his patriarchal vestments, clothed only in a white robe (paralleling the white robe worn by the ancient Jewish high priest when he entered the holy of holies of the temple). After being inspected for matches and other means of lighting fire, the patriarch enters the sepulcher of Christ alone. This is the mystical moment. The faithful wait in tense silence for the miracle: from the empty tomb, with no source of fire, a divine flame will miraculously appear. Some pilgrims come year after year to witness the Easter ritual. Convinced that the flame is divinely ignited each year, people claim to have seen lamps and candles miraculously burst into flame in the cathedral. Only once in history has the miracle failed, when the Crusaders conquered Jerusalem and expelled the Greek Orthodox patriarch from the Holy Sepulcher. The Latin patriarch entered the tomb, but the fire did not come. The Crusaders quickly restored the Orthodox privileges in the cathedral and the miracle resumed the next year.

A few moments after entering the tomb, the holy fire is passed by the patriarch through a hole in the wall of the tomb, where it is quickly transferred to large torch-like candles that flash and spark like flares. The patriarch emerges from the tomb, encircled with the flames of these blazing torches as he blesses the people. The crowds jostle each other to light their candles from the shimmering flames; as each person’s candle is kindled, he or she turns and passes the flame to the next. Within moments the cathedral glows as a wave of fire and light surges in concentric rings like those that spread from a stone dropped in water. The bells of the cathedral reverberate joyously as the crowd shouts and claps in ecstasy. Some weep, while others brush their hands through the flames of candles, ritually washing their faces in the holy fire. Flashes of intense heat from hundreds of candles accompany sprays of hot melted wax.

Then, in a moment, it is over. The crowd begins to disperse as many embrace and shake hands. Priests from all the eastern denominations carry candles and lamps to light the lamps of their churches throughout the city with the renewed holy fire. Many of the faithful take their candles home to light family Easter candles.

Symbolically, the descent of the holy fire commemorates the moment of the resurrection, when the light of God descended into the darkness of the tomb of Christ, transforming death into life. As each person shares the fire of his or her candle with another, the power of the light and resurrection of Christ is symbolically spread throughout the world, and the hope of Easter is renewed.

Professor Daniel C. Peterson is editor in chief of BYU’s Middle Eastern Texts Initiative and a daily blogger for Patheos. Professor William Hamblin is co-author of “Solomon’s Temple: Myth and History.” Their views are not necessarily those of BYU. 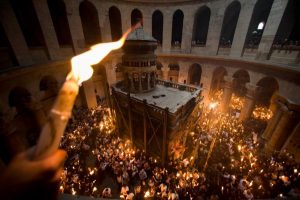 “For the first time ever, the shrine will be taken to the USA, we have already…

Most viewed articles
Bloom Where You’re Planted171
Our Lenten Journey110
The Heart of the Scriptures107
Serbian Patriarch Porfirije Gives Interview to Serbian National Television80
Patriarch Kirill Speaks on the Only Right Path79
Metropolitan Onuphry: Fasting and Prayer Are Two Wings That Help People Draw Near God65
Metropolitan Hilarion: Real People in the Virtual World of the Internet Also Need to Hear the Word of a Priest63
Reading the Bible Has Given Christians Hope During the Pandemic – Survey35
Bishop Benedict of Bistrița in Relation to Young People: I Want to Be One of Them31
Moses and the Ten Words12
Most popular authors
Pravmir.com team321
Fr. Jonathan Tobias172
Priest Luke A. Veronis110
Frederica Mathewes-Green107
Aurelian Iftimiu31
Archpriest Lawrence Farley12