The recent rediscovery of a book, handwritten in Alutiiq and containing numerous gospels of the Bible, could play an important role in the on-going Alutiiq language revival on Kodiak Island.

Daria Safronova is an archivist and faculty member of St. Herman Russian Orthodox Seminary and came across the volume when she received a tip that someone had seen it in the seminary’s archives. 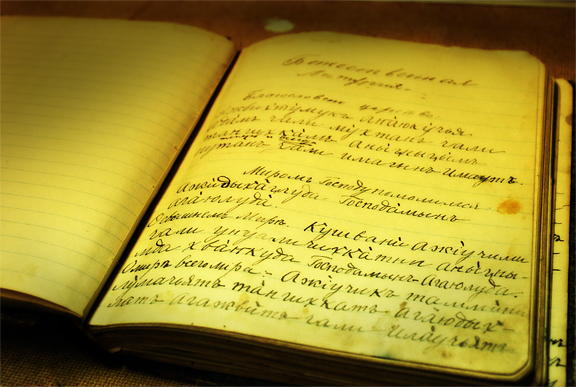 Safronova said the book and its culturally significant contents were previously discovered by the late anthropologist Lydia Black, and was even put on display for a time. However, only recently, as scholars from the seminary and Alutiiq Museum with the help of elders try to revive the endangered language, was its importance realized.

“Maybe it was not the time for it to surface at that point. Now during the Alutiiq language revival, this is an incredibly important document because this is basically a Rosetta stone. This is a literary language preserved and the elders still understand it. A good proof of that was a recent event in Old Harbor, that father Michael read from the gospel of St. Matthew during divine liturgy, and it did it first in Alutiiq, then a couple of versus in Slavonic, and then in English. Well Old Harbor has a congregation of people who still speak Alutiiq, and they understood what he said.”

In addition to the biblical text, Safronova found dozens of teaching documents from church schools founded by Russian Orthodox missionaries in the early1900s. Classroom records, Alutiiq ABC books and even lesson plans written in Alutiiq, Church Slavonic and Russian are now crucial clues that will help the revival. 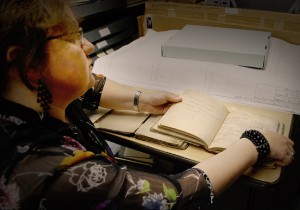 “And this is Alutiiq language in Alutiiq cursive. We can even say there existed Alutiiq cursive. And how we can say that, well if you were consistent and you were forced through the ABC book, you would have known that the difference between Russian alphabet and Alutiiq miraculously is seven letters. Because the sound system is very close. So this for example is “n,” I immediately understood that this is not Russian because it is a “n” sound. But it is an Alutiiq person writing it, and it’s incredible.”

Because of the similarity of Russian and Alutiiq alphabets, Safronova, who speaks fluent Russian, is able to read the handwritten Alutiiq text found in the archives. She said she understands some of it, only because she knows the gospels and prayers in Russian. As for the parts she doesn’t understand, Safronova and Father John, the dean of St. Herman Seminary, meet with Alutiiq elders once a week to read and go through the dense biblical text. Safronova is able to read the Alutiiq cursive, and Alutiiq elders can understand what she is saying. Words or phrases that are unknown to both parties are filled in by Father John, who uses his liturgical knowledge to translate the missing pieces of the gospels.

It’s a slow, collaborative process, according to Safronova. But she said it is something that must be done to gain enough knowledge of the rediscovered materials to use in teaching younger generations.

“Kids are the fastest to learn. At this point it was a perfect demonstration in Old Harbor, an eight and six-year-old, they learned the alphabet and learned how to read basic words in less than one hour. It’s just letters, and then you can learn how to read. And for kids it’s like a code. So there is a big potential in this thing and the elders support it and whatever hard feelings may have existed, for the church, because they couldn’t understand Slavonic, but now it is clear that the church was actually trying to introduce multiple languages.”

For now, the rediscovery process continues, and Safronova says the St. Herman Seminary has opened up its archives to the public, and anyone who would like to come in and learn about the language is more than welcome. She said the process must be inclusive, because it will take input from many different directions to help revive the language.

Safronova teaches Russian language at Kodiak College and plans on incorporating the similarities between Russian and Alutiiq alphabets this fall.