St. Innocent of Alaska (at the time Fr. John Veniaminov) was an amazing man. In a time when travel was thought to be long when someone went to the next town, he journeyed across the whole continent of Asia, crossed the Bering Sea and came to Sitka, Alaska as the priest in charge of the Alaskan Mission of the Russian Orthodox Church.
Archpriest John J. Dresko | 30 September 2010

They will speak to one another in repentance, and in anguish of spir­it they will groan and say, “This is the man whom we once held in derision and made a byword of reproach – we fools! We thought that his life was madness and that his end was without honor. Why has he been numbered among the sons of God? And why is his lot among the saints?

“So it was we who strayed from the way of truth and the light of righteousness did not shine on us, and the sun did not rise upon us. We took our fill of the paths of lawlessness and destruction, and we journeyed through trackless deserts, but the way of the LORD we have not known.” 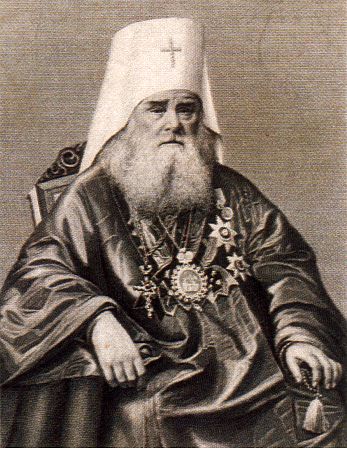 St. Innocent of Alaska (at the time Fr. John Veniaminov) was an amazing man. In a time when travel was thought to be long when someone went to the next town, he journeyed across the whole continent of Asia, crossed the Bering Sea and came to Sitka, Alaska as the priest in charge of the Alaskan Mission of the Russian Orthodox Church.

At a time when priests were cultivating and propagating the Russian Orthodox faith, Fr. John was translating the Gospels into the Aleut language so the natives could understand the Word of God. At a time when churches were being built by groups of faithful, many skilled at labor, etc., Fr. John built churches in Alaska with his own bare hands, so the natives could witness the liturgy and be baptized.

At a time when the “comforts” of travel meant a carriage or, at worst, a bare horse back, Fr. John lowered himself into the hull of a kayak and traversed the rivers, bays and seas throughout Alaska, paying for it later on in life with legs so swollen and sore from the frigid waters that he could barely walk.

At a time of life when most people begin to think of settling somewhere for good, he travelled back to Russia, answering the call of his Church, and returned later as the Bishop of Sitka, only to return once more and die as the Metropolitan of Moscow.

But perhaps the most amaz­ing thing about St. Inno­cent was his vision. When he came to North America, the assignment was a very difficult one. The missionary diocese was untamed, the natives very often would just as soon kill you as lis­ten to your words, and creature comforts were few and far be­tween. St. Innocent, however, saw only one thing – a place where the Kingdom of God and His Word could take root and grow.

He didn’t see “savages,” he saw children of God; he didn’t see mile after mile of untamed forests, he saw sites for future church buildings; he didn’t see the Tower of Babel in the native language which was so difficult to learn, he saw the Pentecost of the Word of God being brought to the people in a way that they could grasp – much as the Lord told parables.

So he worked, and worked, and worked – doing things like translating the Gospels, building churches, learning the language and preaching in it, urging the growth of the church southward and eastward. He truly envi­sioned the Orthodox Church in America.

And he left us heirs. The first and most prominent of those heirs was his future successor, Basil Bellavin, to become St. Tikhon, the first Bishop of New York and later Patriarch of Moscow. St. Tikhon built on the vision of St. Innocent. Where St. Innocent translated the Gospels and services into Aleut so the natives could worship, St. Tikhon saw the need for the Eng­lish language in order to make the Word of God alive in America. St. Tikhon built churches. St. Tikhon became the first bishop to travel regularly throughout the United States by train, by horse, etc. He consecrated Bishop Ra­phael, who would have a special relationship with the Arab peo­ples, he worked with Fr. Sebas­tian Dabovich, who had a special relationship with the Serbs, he worked with the Greeks, with the Albanians, with the Bulgar­ians, etc., etc. He preached about the need for a special Orthodox Church in America, separate from the “old country,” and unified no matter what ethnic background a person came from. He began the theological schools, which come down to us today as St. Vladi­mir’s, St. Tikhon’s, St. Herman’s Seminary, etc. He had a vision.

Other heirs come to mind. Fr. Leonid Turkevich, to become Metropolitan Le­onty, the first Rector of a theolog­ical school in America, and later a saintly image of piety and unity for the former Russian diocese moving towards independence. Fr. Alexander Schmemann, in the words of Metropolitan Philip the “Father of Liturgical Theology,” a saint who returned the liturgy to us and showed us by his life of faith and work what the Eucha­rist is all about. Current and re­cent theologians and hard work­ers for the Church, such as Frs. Meyendorff, Hopko, and Harakas, Serge Verhovskoy, Vesselin Kes­ich, etc. are also heirs.

But, perhaps unnoticed in all of this is that we are also heirs of St. Innocent. When he worked so very hard to plant the Vine of Christ firmly in this vineyard of America, he knew that those following him would have to care for it, water it, weed it, even prune it. He trusted in God to raise up the proper caretakers af­ter he was gone. And whether we like it or not, that responsibility is ours today. How have we cared for the Body of Christ entrusted to us?

Look at the hardships that St. Innocent endured – do we, his heirs, measure up?

• When St. Innocent lowered himself into that kayak and began his journeys, it was a judgment on us. Do we gripe and mumble about the twenty minutes it takes us in our air conditioned (or heated) car to get to church?

• When St. Innocent struggled with the Aleut language and ruined his eyes by continuing to work even after dark by the pale light of a candle or the moon, it was a judgment on us. Do we read the Scriptures or even know our prayers in a language where not only God, but we also, can un­derstand and reflect upon? Have we debased language to the point where we can curse and swear at each other in judgment, and then say “it’s only words?”

• When St. Innocent went out with his bare hands, took an axe and started hewing a place to build a church, later finishing the job by building it himself, it was a judgment on us. How well do we build up the Body of Christ? Do we participate in the work of the Church? Do we volunteer for various tasks? Do we honestly reflect and weigh how much of a financial gift we can share with Christ to enable His work to go on?

• When St. Innocent arose at the break of dawn each day to go and preach the Word of God somewhere new, it was a judg­ment on us. How often do we waste time with trivial things such as TV, trashy books and gos­sip? Do we gripe when we arise for church, noting that “Sunday is the only day I can rest?” Do we offer hours of time to various projects like sports, relaxation, yard work, clubs, school, shop­ping, etc., but lack the time to give something back to God?

Read the passage from the Wisdom of Solomon at the begin­ning again. St. Innocent stayed on the path of righteousness and gave us the map to that path and the vehicle in which to travel it. What type of steward have I been of the inheritance that has been entrusted to me?