On 24 June 2012, the day when the Orthodox faithful in China commemorate two hundred and twenty Chinese martyrs who had suffered for Christ in 1900, Metropolitan Hilarion of Volokolamsk, chairman of the Moscow Patriarchate’s Department for External Church Relations, celebrated the Divine Liturgy at the Church of the Intercession of the Mother of God in Harbin. Metropolitan Hilarion was in the People’s Republic of China (PRC) on official visit with the blessing of His Holiness Patriarch Kirill of Moscow and All Russia and at the invitation of the PRC State Administration for Religious Affairs. 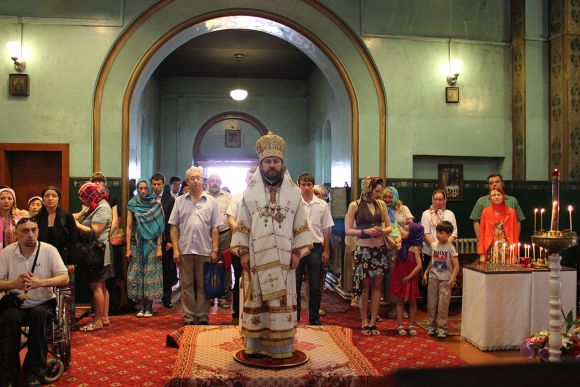 Concelebrating to Metropolitan Hilarion was archpriest Alexy Kiselevich, rector of the Orthodox parish in Shanghai. Helping at the service were Vasiliy Wu and Alexander Yu Shi, members of the Chinese Orthodox community in Harbin who will begin their studies at the theological schools of the Russian Orthodox Church in September in pursuance of the memorandum signed by the Russian Federation’s Presidential Council for Cooperation with Religious Organizations and the PRC State Administration for Religious Affairs (SARA).

Praying at the service were about sixty Orthodox compatriots temporarily or permanently residing in Harbin. Many of them partook of the Holy Communion.

Attending the Liturgy were also Ms Syao Hun, deputy director of the State Administration for Religious Affairs’ department for international relations; Mr Hao Zhuyang of the SARA’s Fourth Department; Ms Marina Kushnarenko, chairman of the Russian club in Harbin; and Russian diplomats: Mr Povalyaev, first secretary of the Russian Embassy in China, and Mr Ganzhurov, vice-consul of the Consulate General in Shenyang.

After the service, Metropolitan Hilarion addressed the worshippers with a homily saying in particular:

“Orthodoxy is reviving in China even if not so fast as we wish. Tens of thousands of Orthodox people of different nationalities temporarily or permanently reside in cities and towns of China. A number of churches, including the Cathedral of the Holy Wisdom of God in Harbin, have been restored. Though not regularly, but the Divine services are celebrated in some churches…

Your strong faith and patience have been preserving the Orthodox faith in the Chinese land. You endevour to preserve this historical Church of the Intercession in Harbin. The church has not had a priest for a long time, yet you come here every Sunday to pray to God. I believe that the day will come when this church will have a rector, the hymns of the Divine service will be heard here again, and the Sacraments will be celebrated. I do my best to bring this day closer…”.

All the worshippers were presented with icons of Christ the Saviour after the Liturgy.

After blessing the worshippers, Metropolitan Hilarion and members of the Russian delegation departed to the Harbin airport where they were offered the farewell dinner.

After that Metropolitan Hilarion of Volokolamsk left for Moscow.

Metropolitan Hilarion’s visit to China was sponsored by the St. Gregory the Theologian Charity Foundation. The DECR chairman was accompanied on his visit by a DECR staff member Dmitry Petrovsky, the Foundation’s executive director Leonid Sevastyanov and subdeacon Alexander Yershov.