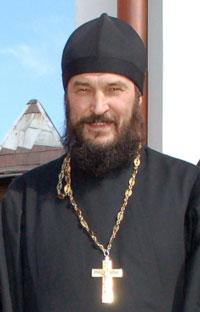 KODIAK, Alaska — A high-order Russian monk stopped in Kodiak while on a pilgrimage that retraces the steps of St. Innocent, the first Russian Orthodox Bishop of Alaska.

Father Eugenii Startsev and a two-man crew arrived from Dutch Harbor last week on the boat, the St. Innokentii.

Father John Dunlop, St. Herman Seminary dean, said people are interested in traveling to Kodiak because there has been a renewed interest in the Russian history of Alaska.

“One of the things of interest in Russia is Russian-American history,” Dunlop said. “People want to rediscover their roots.”

While in Kodiak, Startsev visited St. Innocent’s Academy, the St. Herman Seminary and the downtown area.

“One can’t be indifferent to the cultural heritage on the island,” Father Eugenii Startsev said. “Kodiak is a well-known place on the map of Russian America, and it is a great attraction for Orthodox people around the world.”

Startsev also hopes to build relationships with the youth in Alaska during the pilgrimage. “In the long run we want to establish community bridges between the youth of Russia and the U.S. to understand better,” Startsev said.

Startsev and his group will head next to Juneau and then Sitka.

Professor Alexander Petrov and Hieromonk Makarii Komogorov also traveled to Kodiak from Russia to do research using the seminary’s archives; they are not traveling with Startsev.

During their time in Kodiak, they plan to search through archives with St. Herman Seminary archivist Daria Safronova.

Petrov is a Russian scholar who has spent much of his life studying Russian American history. Kodiak historian Dawn Black and Petrov worked together in the past when they co-authored a book about the Shelikhov family in Kodiak. The Shelikhovs played an important role in the Russian settlement in Alaska. This time Petrov is looking for different information.

“We hope to find all related materials to the development of the Orthodox Church,” Petrov said.

Specifically, he’s hoping to find material that will help him understand the development of parishes and why they were built in certain areas.

Although Startsev, Petrov and Komogorov are completing separate trips, they are working on the same overall project. Everything they learn on their trips will help the Russian Orthodox Church understand its history with the U.S. and Alaska.

“The most important thing is to understand America better,” Startsev said. “We share not only a common history, but a common future.”