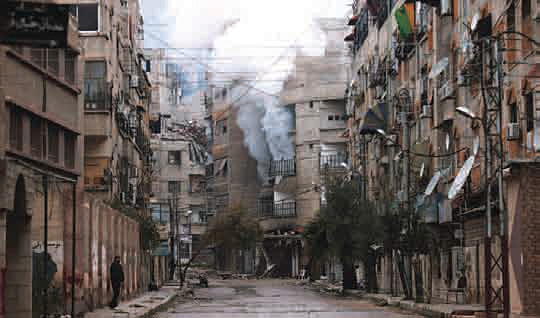 His Eminence Metropolitan Philip Saliba delivered the following speech at the evening prayer service at St. George Antiochian Orthodox Church, in Little Falls, New Jersey for the release of the two abducted Archbishops, Youhanna Ibrahim, and Boulos Yazgi. It is also an appeal to all Arabs in the Middle East and overseas. The speech is also available to download in Arabic (PDF).

Most Reverend Archbishops and beloved brothers and sisters,

In the Word Magazine, published in June which expresses the opinion of the Antiochian Orthodox Archdiocese in North America, I wrote an editorial titled: “Is this an Arab Spring or a tornado?” This tornado extended to wounded Egypt, Palestine, Iraq, beloved Syria, and beautiful Lebanon, while Jordan is standing in these days on the edge of the abyss. After the Zionists’ gangs defeated all Arab armies during the ﬁrst war between Arabs and Israel, the great Syrian poet ‘Omar Abou Reshee, and with much indignation, delivered a poem in Aleppo which he said:

My nation, do you have among other nations a pulpit for the sword or pen?
I look at you with much sadness ashamed from your past which has vanished.
My nation, how many idols you gloriﬁed which did not have the purity of an idol?

This past which has vanished, and over which ‘Omar Abou Reshee is shedding tears, is the dawn of Islam when the Prophet Mohammad destroyed the idols of Al-Ka’bat. As our Lord Jesus Christ drove out the traders from the Temple saying to them: “My House is a house of prayer but you have made out of it a den for thieves.” Do the Salaﬁsts and fundamentalists who slay children as if they are sheep and stab men in their chests to take out the hearts of their enemies and eat them are Muslims? Oh my God, NO! These are the blasphemers and if you do not believe me go to the Holy Quran and learn forgiveness and love. The Quran states: “Man is the brother of man whether he likes it or not.” Advise them to read sourat Al-‘Oumran and sourat Al-Ma’edt, and sourat Mariam maybe they will understand. Our Lord, Jesus Christ, says: “Love your enemies, bless those who curse you and if anyone slaps you on the right cheek, turn to them the other cheek also.” And He also says: “Do to others as you would have them do to you.”

Four months ago two Orthodox Archbishops from Aleppo namely Archbishop Yohanna Ibrahim and Archbishop Boulos Yazgi were abducted. Rumors say that they are imprisoned between the Syrian and Turkish borders and other rumors say that they have been killed and departed to the Heavenly Kingdom. What did these two God-loving Archbishops who have dedicated their lives for prayers, good deeds, and preaching love have done to deserve such treatment? Why haven’t we heard anything from them or their captures after all these days? Real revolutions are made for creating a new world and not for kidnapping, murder, stealing, burning churches and mosques, kidnapping bishops and the bloodshed of priests.

I do not want to talk too long, however allow me to conclude this message with some verses of poetry which were written by the famous and great Damascene poet, Nizar Kabbani, may his soul rest in peace, during the commemoration of the establishment of the Arab League in Egypt, which was moved to Tunisia after President Anwar Al-Sadat signed that shameful peace with Israel. I remember from this famous poem the following immortal verses:

O green Tunisia I have come to you as a lover,
And on my forehead there is a book and a rose.
I am the Damascene whose profession is love.
He sang and the earth and the forest became green.
I am tired my friend with my Arabism.
Is Arabism a curse and torture?
The Arab world is either a slain
Lamb or a butcher ruler.

This is our tragic condition today. Peace and the mercy of God and His blessings be upon you.