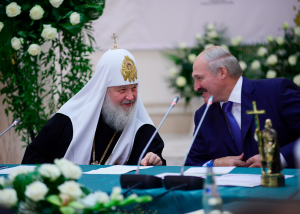 On 29 July 2013, Mr. Alexander Lukashenko, President of the Republic of Belarus, met with the Primates and heads of the delegations of the Local Orthodox Churches, who came to Minsk for the celebration of the 1025th anniversary of the Baptism of Russia. The meeting took place in the White Hall of the Church of All Saints. The Cross of St Andrew the First Called Apostle was brought to the Church of All Saints the day before and will stay there till August 2.

Mr. Alexander Lukashenko welcomed the guests to the Belarusian land and noted that the celebration of the 1025th anniversary of the Baptism of Russia, which is carried out with participation of heads and representatives of all Local Orthodox Churches, is one of the most significant events in the life of the country and shows the great importance of the Orthodox spirituality in the life of Byelorussia.

The President of the Republic of Belarus emphasized the special role that the Russian Orthodox Church has been playing in maintaining peace and unity in society and noted the importance of spiritual bonds that unite people in spite of geographic borders.

“The spiritual choice, made over ten centuries ago, is becoming especially important nowadays,” Mr. Lukashenko said. “For centuries, our Belarusian people have held sacred and preserved the faith of their ansectors.”

The President of Belarus was pleased to note that the spiritual and secular powers in the country act as partners and expressed his hope that the Primates of the Local Orthodox Churches “will bring to their people the good news about the Byelorussia, about the strengthening of its statehood and development of its spiritual life.”

His Holiness Patriarch Kirill of Moscow and All Russia thanked Mr. Alexander Lukashenko for his kind words, addressed to the Orthodox Church, and for the excellent organization of the celebration in the territory of Belarus.

His Holiness emphasized that many significant events occurred in the last twenty-five years, since the celebration of the Millennium of the Baptism of Russia. Those events had an influence on the life of the Slavic peoples and on the life of the Church. As it can be seen today, the Orthodox faith is a spiritual power and the foundation not only of the private, family life, but of the life of the nation as well.

Patriarch Kirill noted numerous positive changes that took place in Belarus in recent years. “There was a time when, in fact, only two churches were left in Belarus, in which the Divine Services were being celebrated,” His Holiness said. “The entire religious life was destroyed. However, it has been gradually reviving, especially during recent twenty-five years.” Patriarch Kirill thanked Metropolitan Filaret of Minsk and Slutsk, archpastors, pastors, monastics and all the faithful in Byelorussia for these positive changes.

His Beatitude Patriarch Theodore II of Alexandria and All Africa also greeted the President of Belarus and thanked him for the warm hospitality. Patriarch Theodore noted that the visit of the Primates of the Local Orthodox Churches to the Russian Church has become a vivid evidence of the accord, cordial relations and mutual understanding between the holy Orthodox Churches.