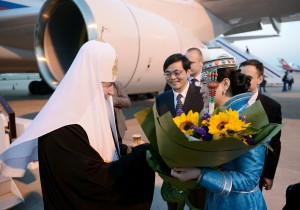 On 14 May 2013, His Holiness Patriarch Kirill of Moscow and All Russia left Harbin for Shanghai.

Accompanying His Holiness Patriarch Kirill on his visit to Shanghai are H.E. Mr. Andrey Denisov, Ambassador Extraordinary and Plenipotentiary of the Russian Federation to the People’s Republic of China; Mr. Zhang Lebin, deputy director-general of the Chinese State Administration for Religious Affairs; and members of the official delegation of the Russian Orthodox Church.

At the Shanghai Hongqiao airport, Patriarch Kirill was met by Mr. Zhao Weixing, Director of the Committee for Nationalities and Religions of the Shanghai Municipal People’s Government; Mr. Andrey Smorodin, Consul General of the Russian Federation in Shanghai; and diplomats of the Russian Consulate General.

In Shanghai, the Primate of the Russian Orthodox Church will meet with the Orthodox faithful, celebrate the Divine Liturgy in the building of the former Cathedral of the ‘Warrantress of the Sinful’ Icon of the Mother of God; and will meet with the vice-mayor of Shanghai.