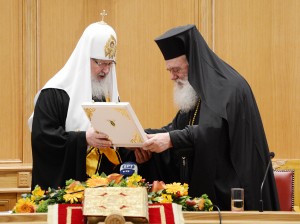 On June 3, after the prayer service at the Petraki Monastery, the Primate of the Russian Orthodox Church attended a grand meeting of the Holy Synod of the Orthodox Church of Greece. The members of the official delegation accompanying him also attended.

His Beatitude Archbishop Hieronymos of Athens and All Greece welcomed His Holiness, saying that his presence in this hall was a special blessing and great privilege.