On 8 September 2013, the feast day of the Meeting of the Vladimir Icon of the Mother of God, His Holiness Patriarch Kirill of Moscow and All Russia officiated at he Divine Liturgy in the square before the Cathedral of the Nativity of Christ in Chişinău. 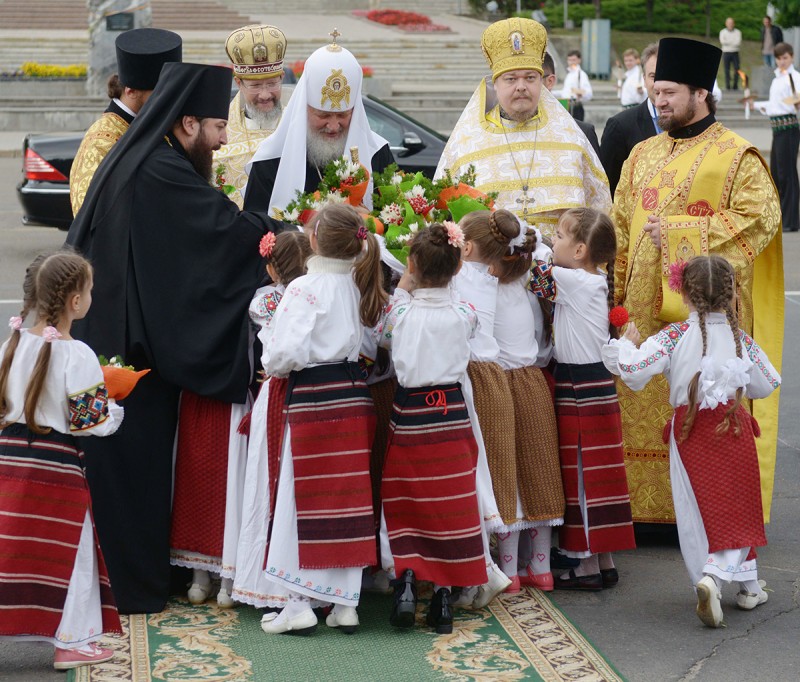 Concelebrating with His Holiness was an assembly of hierarchs of the Russian, Ukrainian and Moldovan Orthodox Churches, among them Metropolitan Vladimir of Chişinău and All Moldova; Metropolitan Hilarion of Volokolamsk, chairman of the Moscow Patriarhcate’s Department for External Church Relations; Metropolitan Onufry of Chernovtsy and Bukovina; Metropolitan Anthony of Boryspil, chancellor of the Ukrainian Orthodox Church; Archbishop Savva of Tiraspol and Dubăsari. Concelebrating with Patriarch Kirill were also members of the Moscow Patriarchate’s official delegation – Archpriest Vsevolod Chaplin, chairman of the Department for Church-Society Relations; Archpriest Nikolai Balashov, vice-chairman of the Moscow Patriarchate’s Department for External Church Relations; Archpriest Igor Yakimchuk, DECR secretary for inter-Orthodox relations; protodeacon Vladimir Nazarkin, assistant to the DECR chairman.

Metropolitan Vladimir made a special mention of the heroic deed committed by the first hierarch of the Chişinău diocese – Metropolitan Gavriil (Bănulescu-Bodoni). The day before, Patriarch Kirill visited the burial place of His Eminence Gavriil. “We know that Metropolitan Gavriil was a great patriot of this land,” Metropolitan Vladimir said. “He was a great zealot of our holy Orthodox Church and performed his ministry in hard times. Being arrested by the Turkish authorities who were urging him to leave the jurisdiction of the Russian Church, he said, ‘I am a monk. I have nobody to cry over me. I have taken a vow and consider it a sin to betray the Church for the sake of several more years of earthly life!’ We are devoted to the ideal which these words, said by our first metropolitan, embody.”

Metropolitan Vladimir noted that Patriarch Kirill shows big interest in the church life in Moldova. “You have taken an interest in the life of our Orthodox Christians, in the life of our monasteries,” Metropolitan Vladimir said. “It is natural because you are our Patriarch – Patriarch of the Moldovans, Gagauz people, Bulgarians and Romanians, as well as the Ukrainians, Byelorussians, and of other people who are under the canonical jurisdiction of the Russian Orthodox Church.”

“Your Holiness, Metropolitan Vladimir continued. “You can see how many people have come to this square today in order to meet you, receive you blessing, and rejoice with you. These are pious Moldavian people who are faithful to their hierarchs and  our holy Orthodox Church.”

His Holiness Patriarch Kirill of Moscow and All Russia addressed the worshippers with his primatial word, saying in particular:

“My heart rejoices when I see all of you, so many people, gathered here, in the central square, at the Cathedral Church of Chişinău… Today we bear witness to the Orthodox faith being a genuine spiritual force of the Moldovans. It unites people, determines their moral principles, forms their value system, according to which every person lives… this value system has been passed on from one generation to another, and it is not a human being, but God Who is the source of this system.

“Today we all, people with different opinions and political views, prayed together, asking God for one thing – well-being and prosperity in Moldova. And I was praying to the Lord so that He would grant His mercy to this land, to the people of Moldova, so that conflicts and confrontations would cease and people could move forward together, having common spiritual foundation, with this spiritual foundation being the only thing that unites the Moldavian people… And I believe that the Lord will grant His mercy and that current economic difficulties, which often make people leave their homes and travel to far-abroad countries, will be over.”

“We celebrate the bicentenary of the establishment of the Chişinău diocese which has been transformed into the Metropolis of Chişinău and All Moldova. We celebrate the bicentenary of the Orthodox Church of Moldova and, of course, we commemorate an outstanding founder of this Church – His Eminence Metropolitan Gavriil (Bănulescu-Bodoni) who proved his faithfulness to the Lord and the Church by the feat of his whole life. We all are his successors and we have gathered here because two hundred years ago, he founded the Orthodox Church of Moldova.”

“This year we celebrate the 1025th anniversary of the event which marked the beginning of our Church’s life. Recalling this event, we pay special attention to a short but important period – recent twenty-five years, as it was exactly twenty-five years ago that the changes in church life began. What has occurred in our Church in these years? It has been such a revival of faith that no other people and no other country have ever seen. Tens of thousands churches, hundreds of monasteries, and almost a hundred of educational institutions have been built and restored. The Church has become a part of all spheres of human life. It has happened after over seventy years of the atheistic rule. We regard all these changes as a great gift of God. And this gift belongs to all the countries that the Russian Orthodox Church bears her pastoral responsibility for. Moldova is the part of the Church where we have seen particularly striking changes in recent twenty-five years. We must thank God for these 1025 years, as well as for 25 years of our revival and for 200 hundred years during which the Orthodox Church in Moldova has existed…

“I would like to express my special gratitude to you, Your Eminence Metropolitan Vladimir, to the hierarchs who perform their ministry in the land of Moldova, to numerous clergymen and to all of you, my dears, for the heroic deed which was committed here, in this land, and which gives us an opportunity to celebrate in glory the bicentenary of the Church in Moldova.”