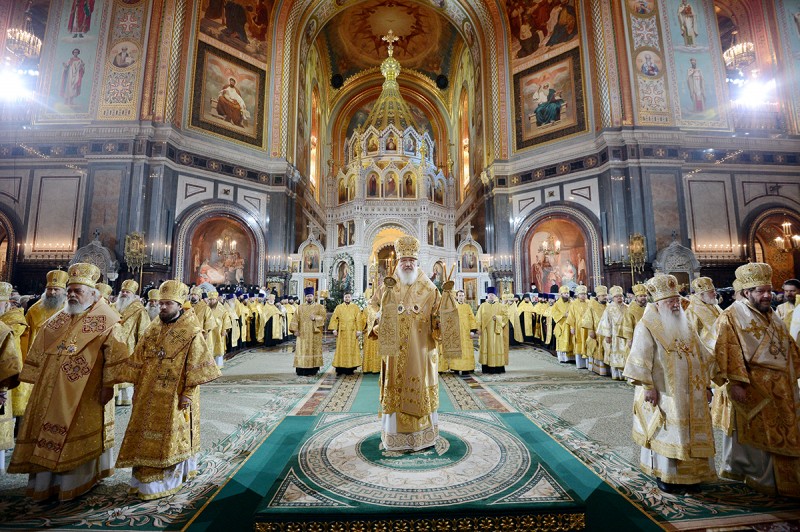 In the evening of 7 January 2013, His Holiness Patriarch Kirill of Moscow and All Russia celebrated Great Vespers at the Cathedral of Christ the Saviour.

Praying at the service were protopresbytor Matfey Stadnyuk, rector of the Cathedral of the Epiphany in Moscow; Mr. Vladimir Legoida, chairman of the Synodal Information Department; hegumennesses of stavropegic convents; Moscow clergymen; members of Moscow churches’ parish councils; staff members of Synodal institutions of the Russian Orthodox Church; Muscovites and visitors to the capital of Russia.

The Primate of the Russian Church addressed all those present with his primatial homily, saying in particular:

“The Feast of the Nativity of Christ helps us better understand the raison d’être of historical events and the destination of the Church and at the same time teaches us to love. The Feast of the Nativity of Christ is the celebration of God’s love to human beings and the proclamation of love as the highest value. Let us accept this message of God into our hearts and serve him in his holiest and most important work – the salvation of humanity.

“Today, as clergymen are praying together with numerous worshippers, I would like to address Moscow clerics with the following words: “Quench not the Spirit” (1 Thess 5:19). May the reverence for the shrine and the fear of God always abide in your hearts because your work is of critical importance for the salvation of many people.”

After the service, His Holiness Patriarch Kirill accepted greetings from the bishops, clergymen and laymen.