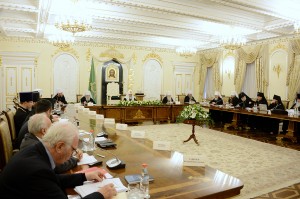 On 21 November 2012, the fifth session of the Presidium of the Russian Orthodox Church’s Inter-Council Presence opened at the Throne Hall of the Patriarchal and Synodal residence in St Daniel’s Monastery under the chairmanship of His Holiness Patriarch Kirill of Moscow and All Russia.

The Primate of the Russian Orthodox Church presented the agenda of the session.

The Presidium of the Inter-Council Presence consists of the following members:

1.     Metropolitan Vladimir of Kiev and All Ukraine;

3.     Metropolitan Filaret of Minsk and Slutsk, Patriarchal Exarch for All Belarus;

5.     Metropolitan Vladimir of Kishinev and All Moldova;

6.     Metropolitan Varsonofy of Saransk and Mordovia, secretary of the Inter-Council Presence;

7.     Metropolitan Kliment of Kaluga and Borovsk, chairman of the Publishing House of the Russian Orthodox Church;

8.     Metropolitan Irinei of Dnepropetrovsk and Pavlograd;

9.     Metropolitan Merkury of Rostov and Novocherkassk, chairman of the Department for Religious Education and Catechization of the Russian Orthodox Church;

11.                       Archbishop Mitrofan of Lugansk and Alchevsk, chairman of the Department for External Church Relations of the Ukrainian Orthodox Church;

13.                       Archbishop Evgeny of Vereya, chairman of the Synodal Education Committee of the Holy Synod and rector of the Moscow Theological Schools;

14.                       Archbishop Feognost of Sergiev Posad, abbot of the Laura of the Holy Trinity and St. Sergius, chairman of the Synodal Department for Monasteries and Monasticism;