His Holiness Patriarch Kirill: China came to the knowledge of Russia through Russian Orthodox Mission 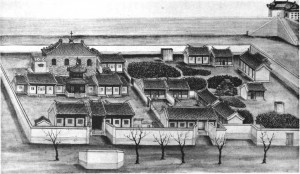 On 12 May 2013, a reception was given on behalf of His Holiness Patriarch Kirill of Moscow and All Russia at the Embassy of the Russian Federation in the People’s Republic of China.

Present at the reception were members of the official delegation, accompanying the Primate of the Russian Orthodox Church on his visit to China; H.E. Mr. Anrdey Denisov, Ambassador Extraordinary and Plenipotentiary of the Russian Federation to the People’s Republic of China; diplomats and Chinese religious figures; representatives of the Chinese State Directorate for Religious Affairs; and Russian compatriots living in China.

In his greeting speech, His Holiness Patriarch Kirill of Moscow and All Russia touched upon the history of the place in which the Russian diplomatic representation is located. Patriarch Kirill said, “The Soviet Embassy was built in the territory of the Russian Orthodox Mission which had maintained diplomatic relations with China since 1712. For many decades, the Mission played the role of a Russian diplomatic representation; it means that China came to the knowledge of Russia through the Russian Orthodox Mission.”

That is why the Russian Church paid special attention to the training of monks who came to serve in China. “There were some outstanding scholars among the heads and members of the Mission. First of all, I would like to mention Archimandrite Hyacinth (Bichurin) who laid the foundation of Russian academic researches on China. Scholars in Russia and all over the world still use the works of Fr. Hyacinth,” His Holiness said. “Thanks to the activity of the Russian Orthodox Mission, China was dear to the Orthodox faithful, to the Russian Orthodox Church. Our Church exerted every effort in order to bring two nations and two countries together, so that China and Russia would live in peace, friendship and cooperation.”

Patriarch Kirill noted that in spite of the fact that the Russian Orthodox clergymen had left China, they had made their mark in the spiritual life of the country. “Their work resulted in the establishment of the Chinese Orthodox Church, with her bishops and clergymen. Up to 1960s, the Chinese Church united thousands of the faithful,” His Holiness said.

The Primate of the Russian Orthodox Church recalled his first visit to the Russian Embassy in Beijing in 1993, saying: “Since then the restoration of the Church of the Assumption has begun. We worked together with our Chinese colleagues, representatives of the Administration for Religious Affairs, and our joint work has resulted in the restoration of the Church which we all can now look at with admiration.”

“We are deeply convinced that the restoration of the Chinese Orthodox Church is also a very important task, which should be a matter of our common reflection and joint work,” His Holiness said, noting that the process should be based on the Constitution of the People’s Republic of China and be in compliance with Chinese laws. Patriarch Kirill emphasized that everyone he had discussed the issue with had expressed that point of view.

His Holiness Patriarch Kirill expressed his confidence that the relationships between China and Russia, as well as Ukraine, Belarus, and Moldova (these countries form the canonical territory of the Russian Orthodox Church) would develop. His Holiness said, in particular: “I am deeply convinced that this cooperation is called strategic not for nothing, as the prosperity of our countries and well-being of our people depend on it.”