On 4 March 2013, His Holiness Patriarch Kirill of Moscow and All Russia received Metropolitan Antony of Borispol, chancellor of the Ukrainian Orthodox Church, and Mr. Serhiy Lyovochkin, head of the Presidential Administration of Ukraine. 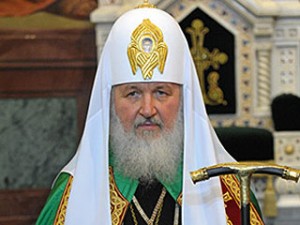 Among the issues discussed at the meeting was the preparation for the joint celebration of the 1025thanniversary of the Baptism of Rus’.

As His Holiness Patriarch Kirill noted in his report at the recent Bishops’ Council, the 1025th anniversary of the Baptism of Rus’ should be widely celebrated by the Church and the public all over the territory of the historical Rus’.

Most viewed articles
How Can We Evangelize Today?201
Five Signs of a Modern Pharisee189
Trial of Politician Defending Traditional Marriage Begins in Finland100
Medical Workers Walk 1.5 Km Through Snowdrifts and Save the Life of a 100-Year-Old Woman97
Grains of Wisdom and Piety Book Published68
Bad Habits And Their Cure68
Hierarchs of Three Local Orthodox Churches Concelebrate in Argentina65
ROC Holy Synod Discusses the Announcement of the Patriarchate of Alexandria Concerning the Establishment of the ROC Patriarchal Exarchate of Africa41
Patriarch Daniel prays for Romania’s national unity, peaceful coexistence and dignified cooperation with other peoples37
150th anniversary of the establishment of the North American diocesan see in San Francisco31
Most popular authors
Pravmir.com team402
Frederica Matthewes-Green201
Archimandrite Markell (Pavuk)189
Saint Nicodemus the Hagiorite68
Aurelian Iftimiu37