His Holiness Patriarch Kirill meets with delegation of Ecumenical Patriarchate 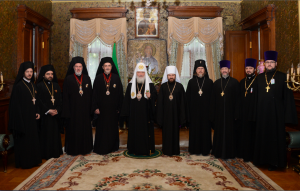 On 24 July 2013, His Holiness Patriarch Kirill of Moscow and All Russia met with a delegation of the Ecumenical Patriarchate which arrived in Moscow to participate in the celebration of the 1025th anniversary of the Baptism of Rus. The delegation consists of Metropolitan Emmanuel of France; archimandrite Bartholomew (Samaras), secretary general of the Holy and Sacred Synod; and archimandrite Bessarion (Komzias), director of the Patriarchal library.

“We are happy to see you among the participants in the celebration of the `1025th anniversary. This date is very meaningful for us and for you,” His Holiness said while greeting the guests. He mentioned another date celebrated this year: 1150 years ago Patriarch Photius sent Ss Cyril and Methodius on a mission to the Slavic countries. The first Christians in Rus appeared thanks to this mission. Later, the Great Prince Vladimir was baptized and initiated the baptism of all Russia people. This event was of a great importance as it expanded the Eastern civilization and made it even stronger.

The Primate of the Russian Orthodox Church mentioned many events, both joyful and tragic, that happened during the last twenty-five years and added: “Today we say with gratitude to God that the seeds sown by Prince Vladimir have not only ripened, but also brought a great fruit.”

His Holiness Kirill noted with thanks His Holiness Patriarch Bartholomew’s attention to the celebration. “We regret that he could not come, but we are happy to receive such a worthy delegation,” he said addressing Metropolitan Emmanuel of France, who expressed gratitude for an invitation and said further that our Churches have always maintained good relations and the spirit of mutual understanding despite certain difficulties, but God’s wisdom triumphed at those moments.

As to the development of relations between the two Churches, Metropolitan Emmanuel noted the importance of contacts maintained through the Department fir External Church Relations and especially with its chairman, Metropolitan Hilarion of Volokolamsk.

During a long fraternal talk, discussed was a wide range of problems of Orthodox cooperation, interconfessional relations and bilateral inter-church relations. In consideration of the work for the good of the Holy Church and in connection with the 1025th anniversary of the Baptism of Rus, His Holiness Patriarch Kirill awarded Metropolitans Emmanuel of France and Bishop Athenagoras of Sinope with the Orders of St. Vladimir (1st class), archimandrite Bartholomew (Samaras) and archimandrite Bessarion (Komzias) – the Orders of St. Vladimir (3rd class).