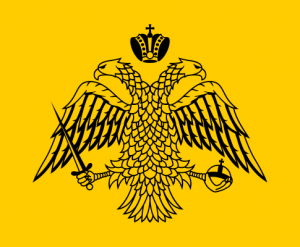 On 26 July 2013, His Holiness Patriarch Kirill of Moscow and All Russia met with the representatives of the Greek Orthodox Church who are taking part in the celebration of the 1025th anniversary of the Baptism of Russia – Metropolitan Prokopios of Philippi, Neapolis and Thasos and Archimandrite Ignatios (Sotiriadis). They were joined at the meeting by Metropolitan Hilarion of Volokolamsk, chairman of the Moscow Patriarchate’s Department for External Church Relations; Archpriest Nikolai Balashov, DECR vice-chairman; Archpriest Igor Yakimchuk, DECR secretary for inter-Orthodox relations; and DECR staff members, Mr. Valery Mamonov and Anatoliy Churiakov.

His Holiness Patriarch Kirill thanked the members of the delegation of the Greek Orthodox Church for taking part in the celebration and expressed his regret that His Beatitude Hieronymus, Archbishop of Athens and All Greece, could not attend the celebration. “We understand the reasons why he could not come and we are glad that he gave his blessing to you, a most respectable Greek hierarch and the head of the Secretariat for inter-Orthodox relations, to lead the delegation,” His Holiness said.

Patriarch Kirill expressed his firm belief that frequent meetings with the Primates and bishops of the Local Orthodox Churches help size up the situation and develop fraternal relations. “It is important that our official meetings are accompanied by common prayer,” His Holiness said. “We can have different views on some issues, but when we celebrate the Eucharist together, embrace each other and say ‘Christ is in our midst’, we forget all disagreements because God’s grace unites us. It is a great phenomenon of the unity of the Church, which we must preserve in every possible way.”

The Primate of the Russian Orthodox Church asked the members of the delegation to convey his words of brotherly love to His Beatitude Archbishop Hieronymus.

Metropolitan Prokopios of Philippi, Neapolis and Thasos greeted His Holiness Patriarch Kirill, saying, “We have vivid and joyful recollections of your visit to the Greek Orthodox Church.”

He conveyed to Patriarch Kirill fraternal greetings from His Beatitude Archbishop Hieronymus of Athens and All Greece and from the Holy Synod of the Greek Orthodox Church.

Most viewed articles
Seven Lessons for the New Year from St. Seraphim of Sarov207
The Perfectionist116
New Jersey Governor Signs Bill Legalizing Abortion Up To Moment of Birth91
The Way of Christ Is The Way of Love57
140th anniversary of repose of St Antipas the Athonite of Calapodești celebrated in Roman56
Metropolitan Hilarion Celebrates the 20th Anniversary of His Episcopal Consecration52
A Great Time to Join the Orthodox Church15
1
Sunday of the Samaritan Woman1
How We Worship: the Struggle of the American Experience1
Most popular authors
Priest Luke A. Veronis207
Protopresbyter Themistoklis Mourtzanos116
Ryan Foley91
Fr. Theodore Stylianopoulos57
Aurelian Iftimiu56
Pravmir.com team52
Frederica Matthewes-Green15