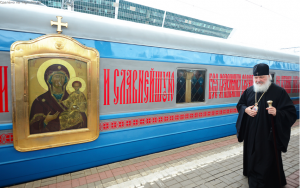 On 26 July 2013, His Holiness Patriarch Kirill of Moscow and All Russia met with the members of the delegation of the Orthodox Church of Czech Lands and Slovakia, who are taking part in the celebration marking the 1025th anniversary of the Baptism of Russia. The delegation includes Archbishop Rostislav of Prešov, Bishop Joachim of Godonin, and Mr. Juraj Durila.

The Primate of the Russian Orthodox Church greeted the guests. Representatives of the Orthodox Church of Czech Lands and Slovakia conveyed to him greeting from the Holy Synod and Archbishop Simeon of Olomouc and Brno, the Locum Tenens of the Primatial Throne.

The members of the delegation told His Holiness Patriarch Kirill about the current situation in the Orthodox Church of Czech Lands and Slovakia.

His Holiness Patriarch Kirill of Moscow and All Russia presented Archbishop Rostislav of Prešov with the Order of St Vladimir Equal-to-the-Apostles (2nd class), and Bishop Joachim of Godonin and Mr. Juraj Durila – with the Order of St Vladimir (3rd class) – in consideration of their service for the benefit of the Church and on the occasion of the celebration marking 1025th anniversary of the Baptism of Russia.