His Holiness Patriarch Kirill meets with His Highness Albert II, Prince of Monaco

On 3 October 2013, His Holiness Patriarch Kirill met with His Highness Albert II, Prince of Monaco.

They were joined in the meeting, which took place at the Patriarchal and Synodal residence in St. Daniel’s Monastery, by Metropolitan Hilarion of Volokolamsk, chairman of the Moscow Patriarchate’s Department for External Church Relations (DECR), Miguel Palacio, a DECR staff member, Princess Charlene of Monaco, Lieutenant-Colonel Bruno Philipponnat, Princess Corinna zu Sayn-Wittegenstein,

Alexei Meshkov, deputy foreign minister of Russia, Alexander Orlov, ambassador of the Russian Federation to the French Republic, and Leonid Slutsky, a member of the State Duma. 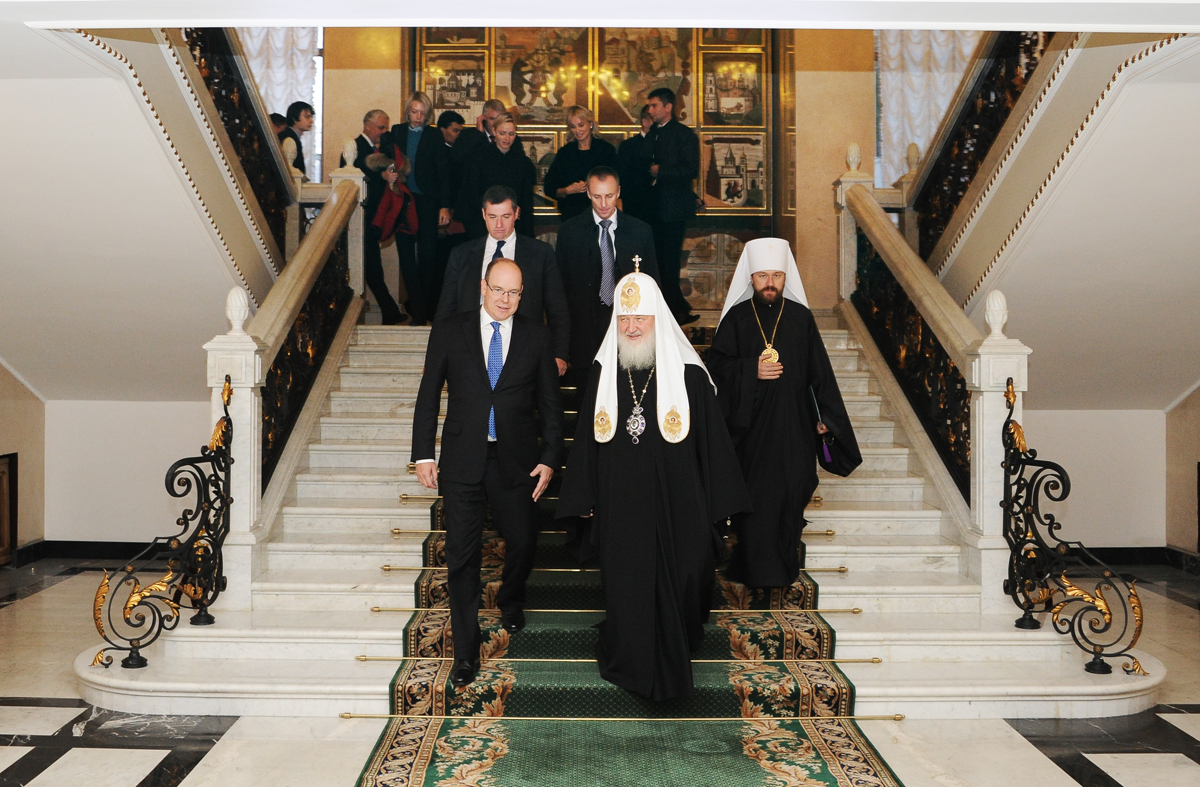 His Holiness warmly greeted the high guests at St. Daniel’s Monastery, the oldest in Moscow, now the administrative and spiritual centre of the Russian Church. He said: ‘Your official visit to Russia begins here. It is not your first visit to Moscow. The previous ones were marked by remarkable events, such as your trip to the North Pole, and people in our country knew about them through the mass media coverage and welcomed your willingness to work for the better future of our planet.”

His Holiness mentioned that during the expedition to the South Pole Prince Albert II visited the Russian Orthodox church there and added that the priest who served in this church was elected bishop yesterday and now will serve in the beautiful region of the Mountain Altai.

Prince Albert II is visiting Russia in the year that marks the 400th anniversary of the Romanov dynasty. His Holiness noted that it was widely celebrated and that the exceptional contribution of the monarchs into the making and development of Russia was noted.

The Primate of the Russian Church mentioned Emperor Alexander II in particular, as relations between Russia and Monaco developed during his reign and he was awarded the Order of Saint-Charles, the highest award of Monaco.

His Holiness underscored the role of cultural factor in bilateral relations and mentioned some renowned persons, such as Tchaikovsky, Dyagilev, Pavlova, Shalyapin and Chekhov. He continued to say that the Russians liked to visit Monaco in old times and that now many come to Monaco, some even live there. He met many Russian-speaking people during his visit to Monaco five years ago and thinks that they are ‘a living bridge’ between our countries.

Prince Albert II thanked His Holiness on behalf of his wife and his suite for kind invitation to visit and said that he liked to come to Russia as every time he and members of his family find new aspects in this large country. He was fortunate to be not only in Moscow but in other regions as well, learning something new about Russian culture and traditions. He said that he was happy to visit the North Pole and mentioned Artur Chilingarov and other scientists who helped him and have become true friends.

Prince Albert II added that the long-standing relations between the two countries have got a new impetus at present and expressed his hope for his visit to become a contribution to their development as they have not only diplomatic and political dimension, but also a cultural one.