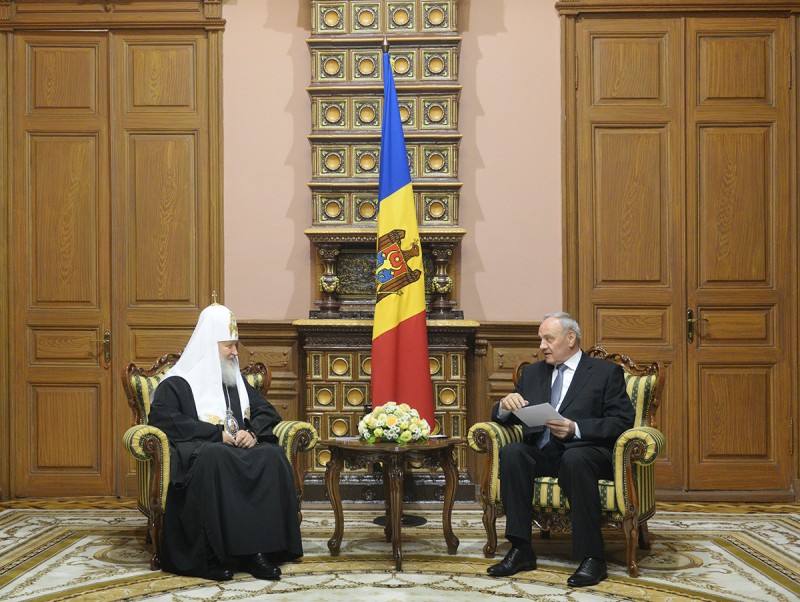 On 7 September 2013, His Holiness Patriarch Kirill of Moscow and Russia, who is on a primatial visit to the Orthodox Church of Moldova, met with the President of the Republic of Moldova, Mr. Nicolae Timofti.

They were joined at the meeting by Metropolitan Vladimir of Chişinău and All Moldova; Metropolitan Hilarion of Volokolamsk, chairman of the Moscow Patriarchate’s Department for External Church Relations; Bishop Sergiy of Solnechnogorsk, head of the Moscow Patriarchate’s Administrative Secretariat; Archpriest Vsevolod Chaplin, chairman of the Department for Church-Society Relations; and Mr. Farit Mukhametshin, Russia’s Ambassador to Moldova.

Addressing the Primate of the Russian Orthodox Church, Mr. Timofti noted the important role of the Orthodox Church in Moldova, her care for the people living in the Republic, and expressed his special gratitude to Metropolitan Vladimir of Chişinău and All Moldova for his ministry.

“Your Excellency, Mr. President, I am glad that it is our second meeting in so little time. I put a high value on the ties we have established. It is important for a Patriarch to have direct relations with heads of states in which the Moscow Patriarchate carries out its pastoral activity. Our Church is multinational and comprises tens of millions of people in sixty-two countries. These are the Russians, Ukrainians, Byelorussians, Moldovans, people of various nationalities. The Moscow Patriarchate has its parishes in Japan, China, Western Europe, as well as in the USA, Latin America, Australia, New Zealand, and Southeast Asia. The Patriarch feels his responsibility for all people, especially for those who have found themselves in difficult economic, social, or political situation.

“It makes us think, pray and work so that the Church would do all she can to reconcile and unite people.

“The Church is especially responsible for the moral state of society. Our history… teaches us that society can preserve solidarity and inner strength if it maintains strong moral feeling.”

Discussed at the meeting was moral dimension of social life.