His Holiness Patriarch Kirill meets with Mr. Thorbjørn Jagland, Secretary General of the Council of Europe 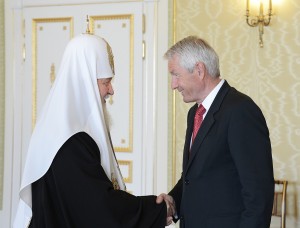 On 21 May 2013, His Holiness Patriarch Kirill of Moscow and All Russia met with Mr. Thorbjørn Jagland, Secretary General of the Council of Europe, at the Patriarchal and Synodal Residence in St Daniel Monastery.

Representing the Council of Europe were Mr. Bjørn Berge, Director of the Private Office of the Secretary General and the Deputy Secretary General; Mr. Alexandre Guessel, head of the Directorate of Political Advice; and Mr. Daniel Höltgen, Director of Communications. Taking part in the meeting were also Mr. A.A. Alekseyev, a staff member of the Russian Ministry of Foreign Affairs, and Mr. Valeriy Levitskiy, deputy head of the Administration for International Cooperation of the State Duma of the Russian Federation.

Addressing the Secretary General of the Council of Europe, His Holiness said, in particular:

“At our previous meeting, we discussed an important topic of human dignity, rights and freedom. I would like to say that the Russian Church has been focusing on this topic for two reasons. The first reason is the legacy of our past: in the 20th century we had known from our own experience how dangerous the violation of human rights and religious freedom could be. The relationships between the Russian Orthodox Church and the state were never smooth.

“While in the Middle Ages the Russian Church was rather independent in her relations with the state, the situation in the Russian Empire changed for the worse. The Church, having been deprived of Patriarch under Emperor Peter I, lost both her freedom and an opportunity to present her own point of view, including that in a dialogue with the state.

“After the revolution the Church suffered severe persecution. Over the past twenty years we have been working to restore at least some of the churches which had been destroyed, but the work has not been completed and many churches are still standing in ruins.

“After social transformations of the 1990s, the Church, for the first time in her history, got an opportunity to find her place in society and in her relations with the state. This has been shaped thanks to, including the experience of civil conflicts. The Church was neither with the government, nor with the opposition, but supported both sides in what corresponded to her own mission. She based herself not on current political situation but on fundamental moral principles of the Gospel. In 2000, we had an opportunity to summarize the experience of the 1990s and adopted the document “The Bases of the Social Concept of the Russian Orthodox Church,” which emphasizes the Church’s independence from any political authority and at the same time her openness to a dialogue with all political forces.”

The Primate of the Russian Orthodox Church noted the importance of the provision of the Universal Declaration of Human Rights, which declares morality a limiting factor in the implementation of human rights. His Holiness expressed his regret over the violation of this principle nowadays, what leads to a serious disbalance between human rights and moral responsibility. Without this balance, rights and freedom promote the liberation of human instincts and become synonyms to permissiveness and dissoluteness. Patriarch Kirill noted that this tendency threatens the existence of human civilization.

“The law has always had moral principles as its foundation,” His Holiness said, having noted a dangerous tendency to adopt laws which equate same-sex unions with marriage and give such couples the right to adopt children.

“We were deeply touched, seeing millions of French people opposing the bill legalizing same-sex unions, and were shocked that the position of these millions of people has not been heard. As a result, the French Senate has passed the bill on the cliff-hanging vote… I would like to say that we have taken a principled stand in this matter. The Russian Church respects human freedom of choice, even if it is sinful. For instance, divorce or adultery is a sin from the Christian point of view, but the Church recognizes such choices as facts and the right of a human being to live as he or she wishes. One cannot drive a person into paradise against his or her will. If a person wants to commit a sin, he or she will do it. We have the same attitude to same-sex unions. If people chose this way of life, it is their right, yet they are guilty of committing a sin. The Bible offers unequivocal evidence that it is a sin. There is a story of Sodom and Gomorrah in the Old Testament, and we find clear exhortation of St Paul in the New Testament. That is why we are deeply worried that the sin has been justified by the law for the first time in human history…”

As His Holiness Patriarch Kirill noted, the Russian Church regards herself as an integral part of the European civilization. “We are responsible for what is going on in this civilization, for we, unlike any European country, gained a unique historical experience in the 20th century,” His Holiness said. “It was our country that tried to build society without God. We know what kind of system it is. For this reason, we express our willingness to take part in a dialogue with you and with all concerned forces in Europe in order to reflect on our common future.”

Addressing the Primate of the Russian Orthodox Church, Mr. Thorbjørn Jagland said that the Council of Europe regarded maintaining human dignity as one of its goals and attached great importance to human independence and immunity, as these are the factors important in any society. Mr. Jagland appreciated the role that the Russian Orthodox Church is playing in Russia nowadays and used to play in the time of communist regime.