On 21 January 2013, His Holiness Patriarch Kirill of Moscow and All Russia met with Holiness and Beatitude Catholicos-Patriarch Iliya II of All Georgia and with the delegation of the Georgian Orthodox Church. The meeting took place at the Patriarchal residence in St. Daniel Monastery. 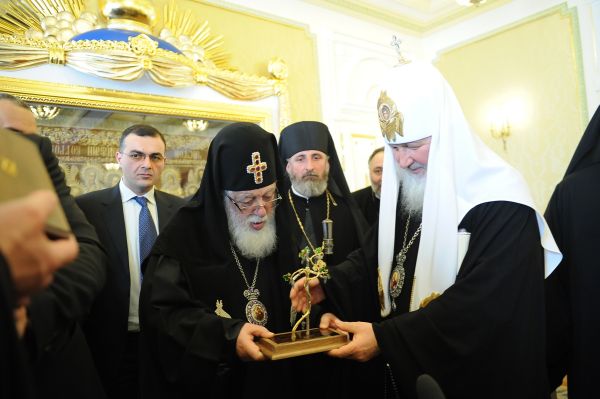 “Special welcome to you in this church at the spiritual and administrative centre of the Russian Orthodox Church, as your visit arranged for receiving the award of the International Foundation for the Unity of Orthodox Christian Nations (IFUOCN) is much more significant.

“We greet you as the Primate of the friendly sister Church of Georgia and as the spiritual leader of your nation. We are aware of the role you played in the preservation of peace, mutual understanding and cooperation among Georgian people of different political views.

“We thank you for your labours and rejoice at the opportunity to welcome you and your respected companions in our capital city. May your visit to Holy Russia be blessed and bring a freshening contribution into the development of bilateral relations between our countries and peoples.

“Your Holiness, welcome to the Russian Orthodox Church!”

Catholic-Patriarch Iliya II cordially greeted Patriarch Kirill on behalf of the Holy Synod and of all faithful children of the Georgian Orthodox Church and expressed his gratitude for the IFUOCN award and his conviction that his visit will be conducive to the mutual understanding and strengthening of brotherly ties between the Georgian and the Russian people.

The two Primates were joined in their fraternal talk by Metropolitan Hilarion and archpriest Nikolai Balashov from the Russian Orthodox Church and Metropolitan Theodore of Akhaltsikhe and Tao-Klarjeti, Metropolitan Gerasim of Zugdidi and Tsaishi, and archimandrite Vakhtang (Liparteliani) of the Church of St. George the Victorious in Moscow.

After tat, His Holiness Patriarch Kirill met with the official delegation of the Georgian Orthodox Church: Metropolitan Theodore of Akhaltsikhe and Tao-Klarjeti; Metropolitan Dimitry of Batumi and Lazeti,; Metropolitan Gerasim of Zugdidi and Tsaishi, head of the Foreign Department of the Georgian Orthodox Church; Protopresbyter Georgy Zviadadze, rector of the Tbilisi Theological seminary; archimandrite David (Chincharauli); archimandrite Vakhtang (Liparteliani); Mr. Tamaz Gamkrelidze, president of the Georgian National Academy of Sciences; and Mr. Lasha Zhvania, general director of the International Charity Foundation of the Catholicos-Patriarch of All Georgia.

His Holiness Patriarch Kirill opened the meeting and greeted the Primate of Georgian Orthodox Church and members of the delegation. He congratulated Catholicos-Patriarch Iliya II of All Georgia on his 80th birthday and the 35th anniversary of his enthronement and thanked Catholic-Patriarch Iliya II for given to the delegation of the Russian Orthodox Church at the festivities in Tbilisi. His Holiness noted that Georgian society experienced radical changes last year; the process went peacefully and constructively and without confrontation largely thanks to the Primate of the Georgian Orthodox Church.

Patriarch Kirill underscored: “Relations between our Churches never depended on political situation and have always been warm, sincere and trusting”. He believes that their dynamic development would help develop relations between the two states and contacts among the Russian and Georgian people.

His Holiness highly appreciated the results of the first session of the Joint commission on a possible reburial of the Georgian Kings Vakhtang VI and Teimuraz II. He said: “The decision depends on many factors The Commission should collect all necessary data, tackle with difficult issues, and present the problem for pubic consideration. Any action taken without public support can cause a possible damage to our bilateral relations. We are confident that the Commission will cope with its work, which we are willing to support, and we shall pray for successful completion of its work.”

His Holiness mentioned the consecration of the Sretensky church at Donskoy Monastery where King Archil’s family and outstanding representatives of Georgian nobility are buried and thanked the Georgian side for assistance in restoring the church.

His Holiness highly appreciated pastoral work of archimandrite Vakhtang (Liparteliani) who takes spiritual care of the Georgian community in Moscow.

His Holiness stated that the Russian and Georgian Churches used similar approach to the urgent topics in the Orthodox world, including the preparation for the Great and Sacred Council of the Eastern Orthodox Churches.

Patriarch Kirill also noted that through common efforts we could assist the solution of problems in pastoral sphere in Abkhazia and South Ossetia. Our dialogue will help the two Churches to act with pastoral caution for the sake of Orthodoxy there.

His Holiness and Beatitude Iliya II thanked His Holiness Kirill for hospitality and clear position on the discussed matters, noting in particular the Russian Orthodox Church’s attitude to canonical jurisdiction of Abkhazia and ‘Tskhinvali region” and added: “We should be close friends who understand each other in everything.”

Expressing his gratitude for the award, Catholicos-Patriarch Iliya II underscored that he considered it as recognition of the merits of the entire Georgian Orthodox Church.