His Holiness Patriarch Kirill meets with Shi Yongxin, Abbot of the Shaolin Temple 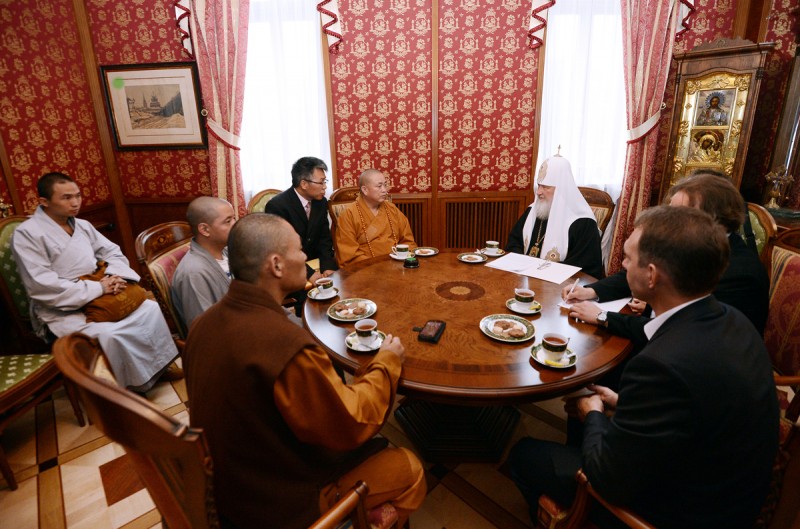 On 4 September 2013, His Holiness Patriarch Kirill of Moscow and All Russia met with Shi Yongxin, vice-chairman of the Buddhist Association of China and abbot of the Shaolin Temple.

The delegation of the Chinese monks arrived in Moscow to take part in the Spasskaya Tower International Military Music Festival.

Present at the meeting were Mr. Andrei Lebedev, producer of the Spasskaya Tower Festival; Mr. Dmitry Petrovsky, a DECR staff member; and members of the delegation.

The Primate of the Russian Church warmly greeted the guests and noted he was pleased to meet the abbot of the Shaolin Temple for the second time. Their first meeting took place on 13 May 2013, during His Holiness Patriarch Kirill’s visit to the People’s Republic of China.

“The idea of comfort is one of the idols of modern civilization. However, living in comfort, a man is getting weaker,” His Holiness said. “A person grows by overcoming difficulties and problems, grows spiritually when he is able to exercise self-denial. That is why I am deeply convinced that the 21st century which makes much to increase comfort, should also focus on spiritual education, so that the material progress would go along with inner, spiritual progress of a human personality.”

“The remarkable martial arts which were born within your monastery serve as a very good illustration that human strength depends on the strength of a person’s spirit,” His Holiness added. “Historical examples tell us that victory in wars came not to the most armed or the richest people, but to those who were able to commit an exploit, that is, spiritually strong people. It relates not only to wars – such exploit is highly important for peaceful work as well.”

Shi Yongxin told the Primate of the Russian Orthodox Church about the life of the Shaolin Temple. The participants in the meeting discussed the results of Patriarch Kirill’s visit to China which was held this year in May, as well as a number of issues of interreligious cooperation, the Press-Service of the Patriarch of Moscow and All Russia reports.