His Holiness Patriarch Kirill meets with the Emperor of Japan, Akihito 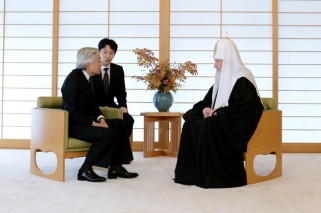 On 18 September 2012, at the Imperial Palace in Tokyo, His Holiness Patriarch Kirill of Moscow and All Russia met with His Imperial Majesty Emperor Akihito of Japan.

The participants in the meeting discussed different aspects of relations between Russia and Japan, in particular, the aspects relating to spiritual and cultural ties between the people of the two countries.