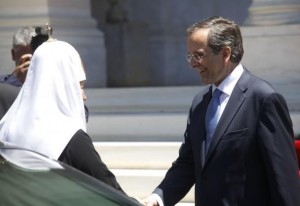 On 3 June 2013, the Primate of the Russian Orthodox Church met with the Prime Minister of the Hellenic Republic, Mr. Antonis Samaras.

They were joined in the meeting, which took place at the prime minister’s working residence, by His Beatitude Archbishop Hieronymos II of Athens and All Greece, Metropolitan Hilarion of Volokolamsk, chairman of the Moscow Patriarchate’s Department for External Church Relations, and Metropolitan Prokopios of Philippe, Neapolis and Thasos.

Prime Minister Samaras and His Holiness Patriarch Kirill shared recollections of their last meeting in Moscow in January 2012. According to Mr. Samaras, he learnt that the Russian Church was going to render her assistance to those who had suffered from the economic crisis in Greece. The assistance has been rendered, and we are thankful for it, he said. As to the difficulties his country is undergoing, he believes that the Greek people are strong in spirit and will cope with the present trials with God’s help and through the prayers of the Mother of God.

The Primate of the Russian Church spoke about common basis on which relations between the two nations have been built for centuries. ‘Political structures, regimes and geopolitical situations change, but relations between our countries have always been good, even at the cold war period. It is the Orthodox faith that unites us. We feel as brothers, and this deepens trust and mutual understanding. Whatever happens in Greece, concerns our nation,’ he said and continued:

“The number of pilgrims from Russia to Greece is increasing; our relations with the Orthodox Church of Greece are developing with an active participation of His Beatitude Archbishop Hieronymos. Relations among countries and nations largely depend on relations among Churches, and nothing should cloud them. In this regard the visit of His Beatitude to the Russian Church and our visit to Greece are very important.”

Regarding the economic crisis, His Holiness said: ‘We are aware of the hard time Greece is experiencing. We know what the crisis means on our own experience. Therefore our people understand only too well the feeling of the Greeks who have found themselves in economic calamity.”

Also discussed were the Middle East problems, and the situation of Christians in the countries of the so called Arab spring in particular, as well as the issues of pilgrimage, the life of the Russian-speaking compatriots in Greece; the role of the Church in the life of society and the defence of spiritual values in the contemporary world.

Most viewed articles
Words from St. Isaac of Syria153
Patriarch Kirill Encourages the Media to Report Proper and Adequate Information about the Church138
Since the Start of the Pandemic Moscow Priests Have Made Over 4,000 Visits to Patients with COVID-19107
“Do Not Weep”102
Archbishop Peter of Chicago and Mid-America in an interview to Poltava Diocese’s press service reveals interesting moments in the life of St John (Maximovich)98
Best Films of the Pokrov Film Festival Have Been Determined88
Christ the Life Giver34
(VIDEO)Celebrating 5 years of Byzanfest International Orthodox Film Festival23
Using Our Time Wisely to Cultivate the Seeds of Faith2
Most popular authors
Pravmir.com team454
Archpriest Stephen Freeman153
Archpriest Peter Olsen102
Fr. Theodore Stylianopoulos34
Priest Luke A. Veronis2