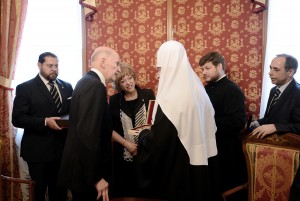 On 28 April 2013, His Holiness Patriarch Kirill of Moscow and All Russia met with Tsar Simeon II of Bulgaria at the Throne Hall of the Cathedral of Christ the Saviour.

Present at the meeting were Archimandrite Philaret (Bulekov), vice-chairman of the Moscow Patriarchate’s Department for External Church Relations; hierodeacon Roman (Kiselev), staff member of the DECR Secretariat for Far Abroad Countries; H.E. Mr. Boyko Koytsev, Ambassador Extraordinary and Plenipotentiary of the Republic of Bulgaria to the Russian Federation; Archimandrite Feoktist (Dimitrov), rector of the Moscow Representation of the Bulgarian Orthodox Church; and Mr. Ivaylo Shalafov, private secretary to Tsar Simeon II of Bulgaria.

Greeting the high guest, the Primate of the Russian Orthodox Church said, “On this feast day, we have had an opportunity to pray together in the Cathedral of Christ the Saviour.”

Addressing Tsar Simeon, His Holiness said with gratitude, “The schism in the Bulgarian Orthodox Church has been overcome with your decisive participation. The schism was the matter of our deep concern, we saw the sufferings which it inflicted on people. Since it was a political action, the participation of the country’s political authorities in overcoming the schism was highly important. The example of the overcoming of schism in Bulgaria shows that authorities should not keep aloof when there appear such tendencies which threaten the unity of the Church and which are caused by the actions of political forces.”

Patriarch Kirill shared his impressions over his visit to the Bulgarian Orthodox Church in 2012. “I recall my visit to Bulgaria as a joyful event, His Holiness said. “Perhaps, I was one of the last people who concelebrated the Liturgy with the late Patriarch Maxim. I also recall our common prayer at the Church of St Alexander Nevsky in Sofia.”

Tsar Simeon II of Bulgaria said in return, “Your Holiness, I am deeply touched by your words. Today, thanks to your invitation, my dream has come true: I visited the Cathedral of Christ the Saviour in 2002, in capacity of Prime Minister of Bulgaria, and made a wish to attend one day the Patriarchal service here. And today, on the Palm Sunday, my dream has come true.”

Touching upon the issue of the overcoming of schism in Bulgaria, Tsar Simeon II noted that as far back as 1965, he had come out against the initiative of the Bulgarian emigrants in America to establish “the independent Bulgarian Church.”