On 21 January 2013, His Holiness Patriarch Kirill of Moscow and All Russia officiated at the ceremony of awarding the prize “For the Outstanding Activity in Strengthening Unity of Orthodox Christian Nations and Promotion of Christian Values in the Life of Society” named after His Holiness Patriarch Alexy II. The ceremony-2012 took place in the Hall of Church Councils of the Cathedral of Christ the Saviour. 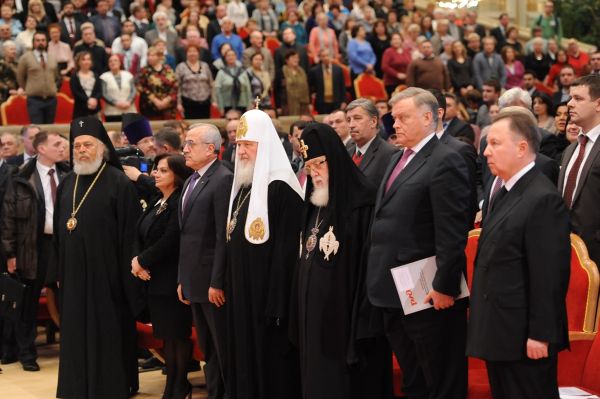 The IFUOCN-2012 prize-winners are His Holiness and beatitude Catholicos-Patriarch Iliya II of All Georgia; General Michel Suleiman, President of the Republic of Lebanon; and Mr. Vladimir Yakunin, president of the Russian Railways Company.

Before the ceremony, His Holiness Patriarch Kirill had a talk with the prize-winners and with the IFUOCN president, Prof. Valery Alexeyev.

A documentary film about the IFUOCN activity was shown before the ceremony; the IFUOCN president gave an opening speech and asked His Holiness Patriarch Kirill of Moscow and All Russia, president of the IFUOCN Board of Trustees, to open the awarding ceremony.

The awarding ceremony was concluded by a concert, performed at which among other musical pieces were “Ave Maria” composed by Catholic-Patriarch Iliya II and ‘In Thee People Rejoiceth’ by Metropolitan Hilarion in honour of His Holiness and Beatitude.