On November 6, 2012, during a meeting with His Holiness Patriarch Kirill of Moscow and All Russia, the Head of the Russian Imperial Family, Grand Duchess Maria Vladimirovna, raised the question of the position that the Russian Orthodox Church takes on the evidence discovered in Brussels. It was originally found in 1918 by the investigator Nikolai Soloviev at Ganina Pit near Ekaterinburg, the site connected to the tragedy of the Royal Family. 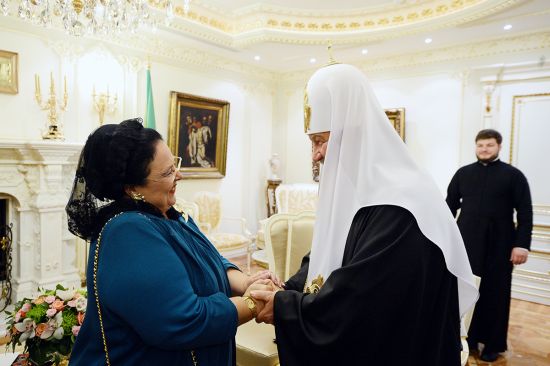 In the opinion of several scholars and public figures, the physical materials discovered in Brussels should spur further research with the aim of establishing the truth of the matter of identifying the so-called “Ekaterinburg remains.”

At the present time, the Hierarch of the Russian Orthodox Church is not prepared to assume as a fact the results of the genetic testing of the Ekaterinburg remains, since their representatives were not granted access to the information on exactly which genetic materials were used for comparing data.

During the meeting, His Holiness declared that the Church is prepared to participate in continuing research of the identification of the remains of the Royal Family with the consideration of the newly-found materials, on the basis of transparency in the expertise and access to all genetic materials connected to the Romanov Dynasty. His Holiness expressed the hope that such research will help establish the truth, which many Orthodox faithful hope for.