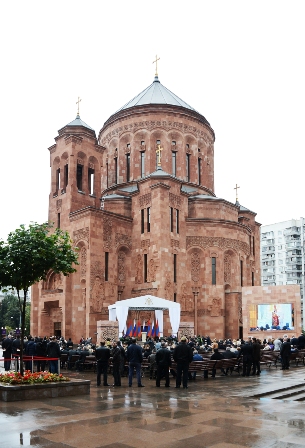 On 17 September 2013, a solemn ceremony of the consecration of the church complex belonging to the Armenian Apostolic Church took place in Moscow, in Trifonovskaya Street.

Supreme Patriarch and Catholicos Karekin II of All Armenians officiated at the consecration. Attending the celebration was His Holiness Patriarch Kirill of Moscow and All Russia.

At the main gate of the church complex, His Holiness Patriarch Kirill was met by Bishop Ezras (Nersisyan), head of the New Nakhichevan and Russia diocese of the Armenian Apostolic Church.

Among the honorary guests of the ceremony were Armenian President Serzh Sargsyan, hierarchs of the Armenian Apostolic Church, Russian and Armenian statesmen, representatives of Christian confessions and the Muslim, Jewish and Buddhist communities.

His Holiness Catholicos Karekin II addressed the participants and numerous guests of the celebrations. His Holiness Patriarch Kirill also greeted all those present, saying in particular:

“Our Churches – the Russian Orthodox Church and the Armenian Apostolic Church – have been maintaining fraternal cooperation for centuries. This Christian foundation forms a common platform which helps the Armenian and Russian people to develop their spiritual life… I am deeply convinced that the further development of relations between the Russian Orthodox Church and the Armenian Apostolic Church, our joint work and projects will foster the spiritual growth of our people and, therefore, contribute to strengthening bonds between our nations – the bonds which are stronger than any political and economic relationships. For we know that there were times when no political or economic relations existed but people lived in peace and respect, treating each other as brothers and sisters. God willing, the spiritual growth of the Russian and Armenian people will contribute, among other things, to strengthening brotherly relations between our nations and countries. I would like to wholeheartedly greet You, Your Holiness, and all those present on the occasion of such remarkable celebration.”

At the conclusion of the ceremony, Patriarch Kirill, Catholicos Karekin and President Serzh Sargsyan opened a monument symbolizing fraternal relationships between the Russian Orthodox Church and the Armenian Apostolic Church.

Most viewed articles
What Is Rejected Becomes the Cornerstone117
His Beatitude Patriarch Theophilos III and bishops of the Russian Church Abroad attend a concert marking the 150th anniversary of the birth of Sergei Rachmaninoff in Jerusalem85
Hierarch of the Jerusalem Patriarchate Speaks in Support of His Holiness Patriarch Kirill84
Utah Church Prepares, Welcomes All for Consecration82
The Savior of the Hopeless, or Is It Possible to Be a Good Person and Not Be Saved?69
Supreme Court Overturns Roe v. Wade in Mississippi Abortion Ruling59
The Forgotten Virtue of Stability57
‘The post-Roe generation’: Pro-lifers set their eyes on heartbeat bills, chemical abortion bans47
Most popular authors
Pravmir.com team251
Archpriest John Moses (+2019)117
Alexander Tkachenko69
CBN News59
Hieromonk Gabriel57
Ryan Foley47