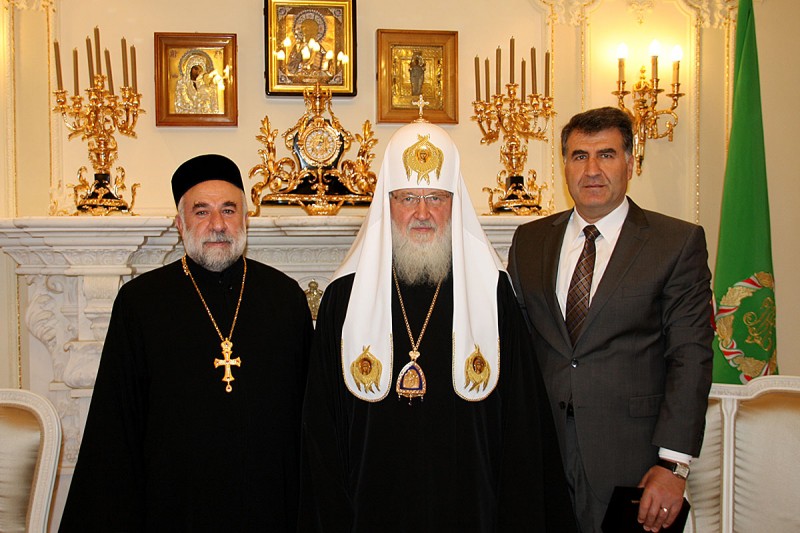 On 24 September 2013, His Holiness Patriarch Kirill of Moscow and All Russia met with Archpriest Samuel Gümüs, special representative of Patriarch Ignatius Zakka I Iwas of the Syriac Orthodox Church, at the Patriarchal residence in St Daniel’s Monastery.

His Holiness told the participants in the meeting about the steps that the Russian Orthodox Church has taken for the release of the eminent Christian hierarchs abducted in April this year – Metropolitan Paul of Aleppo and Iskenderun (Patriarchate of Antioch) and Metropolitan Mar Gregorios Yohanna Ibrahim (Syriac Orthodox Church).

His Holiness assured the guests that the Russian Orthodox Church has been praying unceasingly for the suffering Syrian people.

The representative of the Patriarch of the Syriac Orthodox Church said it was an alarming fact that the problem of the release of the hostages has not been solved yet. He expressed his hope that the efforts made by the Russian Orthodox Church would yield their fruit and the abducted hierarchs would be released.

Most viewed articles
As the End Draws Near – Silence158
A Stone Thrown at God and Your Neighbor103
How Can We Evangelize Today?99
Metropolitan Onuphry: “The Key to the Doors of Paradise is Repentance”85
Hierarchs of Three Local Orthodox Churches Concelebrate in Argentina68
Trial of Politician Defending Traditional Marriage Begins in Finland42
Patriarch Daniel prays for Romania’s national unity, peaceful coexistence and dignified cooperation with other peoples35
Most popular authors
Pravmir.com team195
Archpriest Stephen Freeman158
Protopresbyter Themistoklis Mourtzanos103
Frederica Matthewes-Green99
Aurelian Iftimiu35