His Holiness Patriarch Kirill: We take the sufferings of the Syrian people as our own

On 8 October 2013, the commemoration day of St Sergius of Radonezh, after the Divine Liturgy and a thanksgiving celebrated in the Laura of the Holy Trinity and St Sergius, His Holiness Patriarch Kirill met with the delegation of the Syrian hierarchs who attended the service. 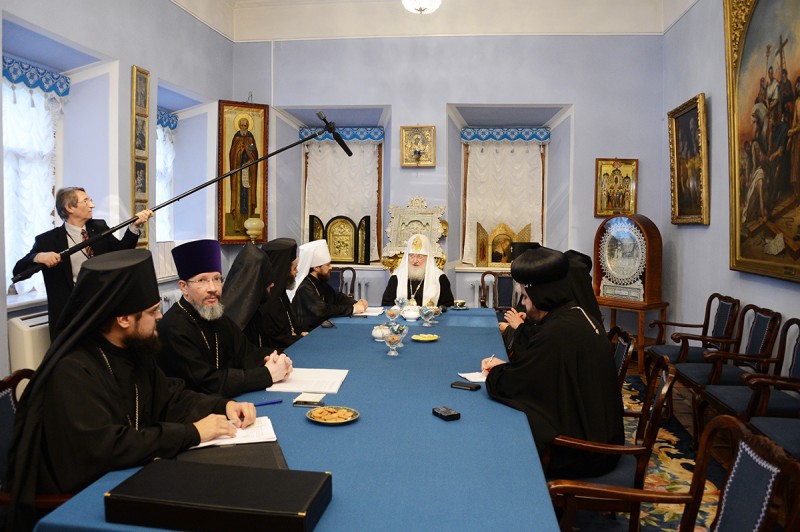 Taking part in the meeting were also Metropolitan Hilarion of Volokolamsk, chairman of the Moscow Patriarchate’s Department for External Church Relations; Archbishop Niphon of Philippopolis, representative of the Patriarch of Antioch and All the East to the Patriarch of Moscow and All Russia; Archpriest Nikolai Balashov, DECR vice-chairman; and hieromonk Stefan Igumnov, a staff member of the DECR Secretariat for Inter-Orthodox Relations.

His Holiness Patriarch Kirill addressed the participants in the meeting, saying in particular, “I know that Syria, your homeland, is suffering greatly. The country is being brought to destruction in the full view of the watching world. It was difficult to imagine this some time ago. It was a peaceful and tranquil country where economy was developing successfully and where people of different religions lived: Orthodox,  Catholics and Muslims. I visited Syria after a ten year interval and did not recognize the country – everything had changed so much for the better. And then, by someone’s evil will, a catastrophe occured: they started killing people, blowing up houses and exterminating Christians under the colour of democracy. We know that those committing such villainous acts get weapons and money from abroad, from people who strive to destroy Syria.”

“You certainly know the position of the Russian Orthodox Church,” Patriarch Kirill continued, “We have taken it when the first shots were fired in the country. When the war began, I went to Syria and Lebanon to support the suffering people. Back then, we had a hope that the conflict could be stopped, but it has escalated.”

The participants in the meeting talked about the aid to the civilian population of Syria. “We do all we can to render humanitarian aid to the suffering and, among other things, we encourage the Russian nongovernmental organizations to join our efforts,” His Holiness said, noting in particular the activities of the Imperial Orthodox Palestine Society which as early as in the 19th century helped the Arab people to build schools and hospitals and which now, together with the Russian Church, is doing all it can to elevate sufferings of the Syrian people.

Another painful matter related to the Syrian crisis is the abduction of Metropolitan Paul of Aleppo (Orthodox Church of Antioch) and Metropolitan Mar Gregorios Yohanna Ibrahim (Syriac Orthodox Church) last April. “We are grieving as there are still no news about our brothers metropolitans,” His Holiness said. “As soon as this tragedy occurred, I immediately asked President Vladimir Putin to make all possible efforts for their release. I also sent messages to President Barack Obama and Mr. Tayyip Erdogan. In my letter to the American President, I insisted on no external force being used in Syria and no aggression being committed against this country. Regrettably, we have no exact information so far about our brothers. However, we have indirect evidences that they are alive. We hope so and will not cease our efforts until they return home.”

The Primate of the Russian Orthodox Church told the Syrian Christian hierarchs about his visit to Syria and Lebanon in 2011, as well as about his meetings with the late Patriarch Ignatius of Antioch and hierarchs of the Jacobite Syrian Church. Patriarch Kirill also mentioned his talks with the Maronite Patriarch Béchara Boutros Raï and members of the Council of Catholic Patriarchs of the East, saying in particular, “I came there when all Catholic hierarchs gathered for our meeting. I had an opportunity to speak to them and I felt that we held the same views on the situation in the Middle East.”

Having mentioned the current Primate of the Orthodox Church of Antioch, His Holiness said, “We thank God that He has chosen Patriarch John to be His servant in this hard time. We hope very much that His Beatitude Patriarch John will perform his ministry in spite of current difficult circumstances, supporting his people and keeping faith in their hearts.” Patriarch Kirill expressed his hope that all Christian hierarchs and clergy in Syria and Lebanon would always hold the same views and would work together for stoping the war in Syria so that the conflict would not spread to other countries, first of all, to Lebanon, Jordan and Palestine.

“If it happens, the most horrible result will be the extinction of Christians in the Middle East, the cradle of Christendom,” His Holiness said and expressed his willingness to work together with the Syrian Christians so that the war would stop, refugees would return back home, everything destroyed would be restored and peaceful life would be re-established.

The guests told the participant in the meeting about the situation in Syria and about the great sufferings of its people. “Today Syria is carrying a hard cross and Russia, like Simon of Cyrene, is coming to help the country when its burden becomes unbearable,” one of the participants said. Representatives of the Syrian Churches expressed their deep gratitude to Patriarch Kirill for his support and conveyed to him greetings from the Primates of their Churches.

During the brotherly repast with the participants in the celebration, which took place in the Holy Trinity and St Sergius Laura, His Holiness Patriarch Kirill once again raised the issue of the sufferings of Christians in the Middle East.

The Primate of the Russian Orthodox Church said that one of the ancient churches in the world located in Holms, where numerous pilgrims from Russia used to venerate a particle of the Sash of the Most Holy Theotokos, was barbarously ruined. It was reported that the Church of the Exaltation of the Lord’s Cross in Damascus was hit by shells on October 6 and many Christians who worshipped in the church were killed. During our official visit to Syria in November 2011, an exhibition dedicated to the relations between the Patriarchate of Antioch and the Russian Orthodox Church was held and the book “Freedom and Responsibility” in the Arabic language was presented.

‘Christianity has appeared in the Middle East: in Palestine, Syria, Lebanon and Jordan. This is the land on which our Lord Jesus Christ walked. This is the land where the Church of Jerusalem, the mother of all Churches, has come into being. And what do we see nowadays? Thousands of Christians are leaving the Middle East, and in case of the proliferation of the conflict, no Christians will remain in the region,’ His Holiness said with great anxiety.

“Cui bono? Why are the buildings ruined and Christians killed? When we are told that all this is done for the sake of democracy, we refute these arguments. Cheap is such a ‘democracy’ under which the blood of thousands of innocent people is shed and Christians are ousted from their homeland, while the leading world mass media keep silence. What does it mean? In what kind of world do we live?

‘I would like to assure our brothers who have come from Syria that we take the sufferings of the Syrian people as our own as churches were destroyed and the blood of thousands of Christians in our country was shed also for the sake of ‘freedom, equality and fraternity.’

I do hope that the complete expulsion of Christians from Syria can be averted by God’s mercy and with the active participation of the Russian Federation. We will pray to the Lord for his mercy to Syria and the entire Middles East,” His Holiness Patriarch Kirill said in conclusion of his address.