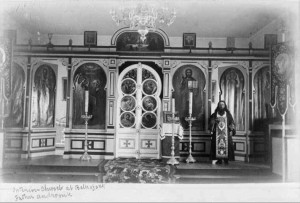 In a report dated April 30, 2013, KTUU Channel 2 News announced that the abandoned Belkofski village on the Alaska Peninsula had been destroyed by fire.

KTUU reported that Makrina Mack, Vice President of the Belkofski Corp., said the corporation became aware three days earlier that the fire that occurred, although the exact date and cause are unknown at this time.  Aerial photos indicate a large blackened area around the village, with just the school building remaining.

Founded in 1824 by the Russian-American Company, Belkofski was home to Holy Resurrection Orthodox Church.  The parish’s first church building was erected in 1843.  In 1880, a new church was constructed.  The structure, which had been placed on the National Register of Historic Places in 1980, subsequently collapsed.  What was left of the church burned in the fire, along with the parish cemetery.

Belkofski’s last residents left the village in 1982.  Many of them resettled in King Cove, AK., where they established a new parish dedicated to Saint Herman of Alaska, in which many of Holy Resurrection Church’s classic 19th century iconostasis and liturgical items were placed.