History of Serbs in America is a history of America

Source: Serbian Orthodox Church in America and Canada
Zorica Zec | 02 May 2014
Belgrade, Serbia - A book promotion was held for All Roads Lead To Jackson by Milina Jovanovic at the Office for cooperation with the diaspora in the region, a publication of the Western American Diocese, Sebastian Press. 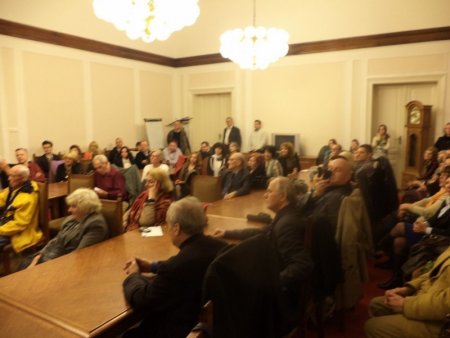 A two hour lecture of the true historical life of Serbs was delivered in the overfilled hall of the Office for cooperation with the diaspora, about Serbs who have spent already two centuries in California and have left behind strong traces, as they continue to do today. The author, a sociologist by profession, spent ten years researching, used many parameters in her methods of shaping her research in a study which in English has turned into “All Roads Lead To Jackson.”

Perhaps coincidental, we could say, “All roads lead to St. Sava Church”, which is the oldest church in the west.

A tall hill dominating the northern California mining town of Jackson Chosen was chosen as the location for the construction of the first Serbian church in America. Some hundreds of Serbian immigrants lived at that time in Jackson and the surrounding area, mostly from Hercegovina, Boka, Montenegro and Vojvodina. Though they were poor, since the majority of our immigrants worked the least paying jobs, the idea of building a church was received with excitement and they devoted themselves to the task at hand. Despite the difficulties, Serbian immigrants succeeded in building a beautiful church of finely cut stone with a large bell tower. The then hieromonk Sebastian Dabovich blessed it on December 4, 1884. The church was frescoed by Miloje Milinkovic. The priest Sebastian Dabovich was depicted for the first time in the St. Sava Church thanks to iconographer Milinkovic.

As Milina Jovanovic’s book testifies, the property that the Serbs purchased at that time was not ideal, yet today our Church has an inescapable location, a symbol of Jackson which can be seen at the very entrance to the city. Serbs interlaced themselves in American history here, so the existence of Serbs in California is not only a part of Serbian history, but also American. As good people, good hosts, builders, inventors, at responsible positions, Serbs and their descendants fought for their authentic and recognizable place cooperating remarkably with others.

It is interesting that this part of America succeeded in preserving it’s own system of values, not succumbing to the pressures of the media which had been telling American citizens for two decades already that Serbs are bad.

“California is not the rule but an exception to this,” said Milina Jovanovic, those she questioned replied that Serbs are a good and cooperative people. Those she surveyed mostly replied in English (90%) since this is a generation which has forgotten its native tongue. We learned that there are no Serbian schools and that the church services are conducted mostly in English.

In her telling of this book writer and academic Krinka Vidakovic Petrov, who at one time served as our ambassador to Israel, offered a small study of studies in which she left nothing out: stressed the many deserving names in preserving our identity, language, culture, faith, of which the author speaks, giving brief notes of their lives and work and transcripts of their conversations. Roads, streets, parks have been named after Serbs in Jackson. An unavoidable figure without whom we Serbs, nor Jackson for that matter could do without is Milo Radulovic who is addressed in relation to the issue of McCarthyism, and greatly assisted the author in her work.

Milina Jovanovic has been living in America for decades now and deals with women issues in her social work. Serbian women in California became widows at an early in life as their husbands, who worked as miners under difficult conditions became sick and died at a young age. They were wonderful wives and mothers who had led a number of children on their path in life; at the same time, active in both the Serbian and American community, devoted parishioners, committed to charity and work in the Circle of Serbian Sisters.

Journalist Vjekosav Radovic spoke of the book and noted that the author of “All Roads Lead to Jackson” uses the term the Golden West, which is not common. This research and book can be a model for others, as well as for us in Serbia, especially for our younger generations, that we might preserve our identity, for without such testimonies we won’t be able to speak the truth in the future. Praising the book were also American journalists and authors: Michael Parenti, Joe Lauria, George Wright, as well as Andrej Grubacic from the California Association of Professors.

The cover bears an artistic piece Amador County by the hand of Bishop Maxim of Western America, thanks to whom this book has seen the light of day.

Among the many guests attending the book promotion were also the American Srbobran editor Aleksandar Petrov, Protodeacon Radomir Rakic, editor of the information service of the Serbian Orthodox Church; Gradimir Stanic, manager of the Foundation for Publications and Printing Press of the Serbian Orthodox Church as well as Olivera Milanovic from the International Radio Serbia which has been in existence for nearly eight decades.

“You Serbs in Jackson are lucky for you know who you are!” is a statement heard often among the citizens of California.

This year will be dedicated to Fr. Sebastian Dabovich. The great work of Milina Jovanovic shows us only a small amount of Serbian values in America. Milina leads us on this road of further work and testimony of spreading the truth about Serbs throughout the world.

Most viewed articles
Bloom Where You’re Planted169
Our Lenten Journey110
The Heart of the Scriptures107
Serbian Patriarch Porfirije Gives Interview to Serbian National Television80
Patriarch Kirill Speaks on the Only Right Path79
Metropolitan Onuphry: Fasting and Prayer Are Two Wings That Help People Draw Near God66
Metropolitan Hilarion: Real People in the Virtual World of the Internet Also Need to Hear the Word of a Priest63
Reading the Bible Has Given Christians Hope During the Pandemic – Survey35
Bishop Benedict of Bistrița in Relation to Young People: I Want to Be One of Them31
Moses and the Ten Words13
Most popular authors
Pravmir.com team323
Fr. Jonathan Tobias169
Priest Luke A. Veronis110
Frederica Mathewes-Green107
Aurelian Iftimiu31
Archpriest Lawrence Farley13