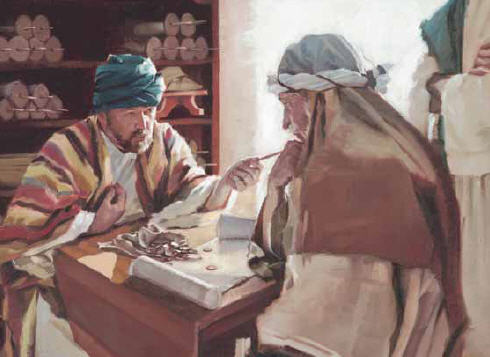 Luke 16 contains one of the most difficult to understand parables of Jesus.  It is commonly called the parable of the Unjust Steward.  For most of my life the parable offended me.  Like the Pharisees in 16:14, I want to deride Jesus for telling a parable that, on the face of it, advocates embezzlement.  The servant in the parable gets sacked for “wasting” his master’s goods, so the servant decides to earn favour with his master’s debtors by writing off a large part of the debt they owe the master.  And what makes this parable particularly hard to stomach is that the master actually commends his servant for doing this.  After sacking the servant for wasting his funds, the master commends him for embezzling them.  How does that make sense?

After Jesus responds to the derision of the Pharisees, he tells the parable of the Rich Man and Lazarus.  We know that this parable is supposed to be understood in conjunction with the previous parable (the Unjust Steward), because both parables begin with the exact same line: “There was a certain rich man who.”  It is actually quite an unusual thing (I don’t think it is repeated anywhere else in the Gospels) that two parables begin with the exact same line.  And while the parable with the first rich man is addressed to his disciples, expounding, I think, on the parable of t he Prodigal son, the second parable with a rich man is addressed to the Pharisees who are “lovers of money,” and to whom he had just said, “You are those who justify yourselves before men, but God knows your hearts.  For what is highly esteemed among men is an abomination in the sight of God.”  In fact, I think the second parable of a rich man is explaining these very words.

So, how does this help us understand the parable of the Unjust Steward?

Here’s what I think.  Just as the Father in the parable of the Prodigal Son is understood as the heavenly Father, so I think we should understand the Master of the parable of the Unjust Steward as the heavenly Master.  The steward in the parable is, in a sense, every human being, but specifically those entrusted with religious leadership, like the disciples and also the Pharisees.   The debtors are the “sinners” whom Jesus ate with.  The goods that the servant wasted are the teachings and the various gifts of grace, especially forgiveness, that should be distributed by the religious leadership to help the poor and the sinners.

As I have read this parable for many years, I could not get past the fact that the unjust steward is commended for embezzlement.  I had assumed that the Master was like an earthly master, like me, in how I looked at wealth.  I thought the master naturally wanted to preserve and increase his wealth.  The thought that the Master had wanted his steward to distribute his wealth never occurred to me—until just a few days ago.  If we look at the parable of The Unjust Steward as a comment on the parable of The Prodigal Son, then it makes sense to see the Master as giving away his goods for the benefit of others just as the Father gave His goods to his youngest son to be squandered in order that his son might be saved.

And so, the very word “wasted” takes on the opposite meaning.  The steward was wasting the Master’s goods in that he was not relieving the debt of the Master’s debtors.  When the steward began forgiving some of the debt of his master’s debtors, even out of selfish motive, that is when his Master commends him.  And this way of understanding the parable makes sense of what Jesus says immediately afterward: “Make friends for yourselves by unrighteous mammon, that when it/you fails, they may receive you into an everlasting home.”  And, “If you have not been faithful in what is another man’s, who will give you what is your own?”  Faithful, in this situation means faithful to relieve the debt of others to God, not faithful to horde wealth: the wealth of forgiveness and grace and all of the gifts (including time, money, and ability) that God has entrusted to you.

This reading of the parable reminds me of an earlier parable in Luke (12: 16 – 21) in which a farmer has an abundant harvest and decides to build bigger barns to store it.  God calls this one a fool.  Why a fool?  Because all that he has will be taken away from him anyway when he dies—in the case of this parable it will be that night, but whether it is that night or thirty years later, still all that he has stored will be given to others, and he will have no benefit from it.  We only benefit from what we freely give.  And keep in mind, the parable speaks of crops, but that’s the metaphor.  The truly valuable thing that has been entrusted to us so that we might give it away is forgiveness, the forgiving of the debts of others against us and even against God.

This forgiveness of sins against God is most clearly seen in the mystery of confession; however, everyone of us, I think, can release others from a debt against God that perhaps we hold in our heart.  What I mean is that like the Pharisees, we can sometimes see some other(s) only as sinners.  We can’t go deeper than that because we cannot find grace in our hearts to release them from their debt.  There has been many a time when I have caught myself being angry at someone on God’s behalf.  I was angry because of the way they had ignored or blasphemed God or ridiculed the Church or enticed others into sinful and destructive behaviour.  I held the debt for God, as though God needed my help in keeping track of the wrongs of others.  God does not call me to hold grudges or keep score, God calls me to forgive.

And even if I cannot forgive it all, the least I can do is forgive fifty percent, or even just twenty percent, as the unjust steward does.  Maybe my conscience will not allow me to forgive it all.  Okay, I start where I can and forgive some.  That’s what we do.  We forgive a part, a piece, a bit.  We offer some bit of the grace that has been entrusted to us when God freely forgave all of our sins.

And if we cannot even forgive a bit, then we humble ourselves and ask for God’s help and mercy.  I have spoken elsewhere on this topic, so I won’t repeat it here.  Let it be enough for us to reflect on the parable.  The unjust steward out of the purely selfish desire to avoid suffering and to gain “an everlasting home,” found a way to forgive some of the debts of others.  May God too help us to forgive the debt of others to God, even if it is just a bit.