The central place among the Sacraments of the Orthodox Church is held by the Holy Eucharist - the precious Body and Blood of our Lord Jesus Christ.
admin | 19 October 2005

2. The Liturgy of St. Basil the Great – celebrated on the Sundays of Great Lent and certain Feast Days.

3. The Liturgy of St. James the Brother of the Lord – celebrated on October 23 (St. James’ Day) in certain places only (e.g., Jerusalem).

4. The Liturgy of the Presanctified Gifts – celebrated on Weekdays of Great Lent and Holy Week. (At this Liturgy there is no consecration of the Holy Gifts, but rather Communion is given from the Gifts consecrated on the previous Sunday – hence Pre-sanctified.)

This institution of the Eucharist by our Lord is the means whereby we become united with Christ and with each other as a church, for, as St. Paul says, the goal of every Christian is to grow up in every way into Him Who is the head, into Christ, from Whom the whole body, joined and knit together by every joint with which it is supplied – makes bodily growth and upbuilds itself in love (Eph. 4:15-16). This is so since Christ is the head of the Church, His body, and is Himself its Savior (Eph. 5:23). We become part of the Mystical Body of Christ by our communion of the Holy Eucharist. As St. Paul says: The cup of blessing which we bless, is it not a participation in the blood of Christ? The bread which we break, is it not a participation in the body of Christ? Because there is one bread, we who are many are one body, for we all partake of the one bread (1 Cor. 10:16-17). 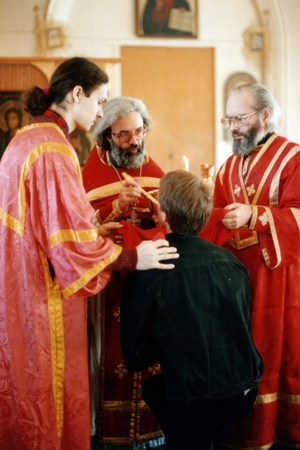 Only by belonging to the Church, or in other words, being in communion with the very essence of Christ through the Sacrament of the Holy Eucharist, can one attain salvation unto eternal life. Thus we can answer the question, “Who can be regarded as a member of the Church of Christ?” by saying, “All those who have been properly baptized in the Name of the Father, Son and Holy Spirit, who believe in the Lord Jesus Christ as the true Son of God come in the flesh (1 John 4:2-3), and are united by the grace of the Sacraments – in particular the Sacrament of the Holy Eucharist administered by the Priesthood of Apostolic Succession.”

The unity of all Christian believers in the Holy Eucharist is strongly stressed by the Fathers of the Church. St. Ignatius of Antioch, in his Letter to the Ephesians reminds them that “all of you to the last, without exception, through God’s grace are united in common faith and in Jesus Christ…, so obey the Bishop and the Presbyters in complete harmony, breaking one bread, this remedy for immortality.” Moreover, the Eucharist is not only a testament to the internal and external unity of the Church, but is also the means for strengthening this unity. Therefore St. Ignatius stresses more frequent Communion: “Try to gather more often for the Eucharist and glorification of God. For if you gather together often, the forces of Satan are overthrown, and his destructive deeds are wrecked by your single-hearted faith” [To the Ephesians].

The union of believers with Christ in the Eucharist is also stressed by St. Cyprian of Carthage who, speaking of the mixing of water and wine in the cup, gives an extended meaning to this mixing: “The people are designated by water, the blood of Christ by wine. Mixing water and wine in the cup shows the people’s union with Christ, the believers’ union with Him in Whom they believe. Water and wine after mixing in the Lord’s Cup are so inseparably and closely united that they cannot be separated one from another. In just this way nothing can separate from Christ the Church, that is, the people that make up the Church, firmly and unshakeably abiding in faith and joined by eternal, indivisible love” [Letter to Cacaelius].
This is reaffirmed in the Liturgy of St. Basil the Great when, after the blessing of the Holy Gifts, we pray that the Heavenly Father “unite us all, as many as are partakers in the one bread and one cup, one with another in communion with the One Holy Spirit.” Thus we can say that whereas entrance into the Church begins with Holy Baptism, its fulfilment lies in the Holy Eucharist.
Orthodox Theology sees the Holy Eucharist as a sacrifice and this is affirmed in the words of the Priest, when he says, during the Eucharistic Canon, “Thine own of Thine own we offer unto Thee on behalf of all and for all.” The sacrifice offered at the Eucharist is Christ Himself, but He Who brings the sacrifice is also Christ. Christ is, at one and the same time, High Priest and Sacrifice. In the prayer before the Great Entrance, the Priest prays: “For Thou art the Offerer and the Offered, the Receiver and the Received, 0 Christ our God….” This Eucharist is offered to God – the Holy Trinity, and so if we ask the threefold question, What is offered? By Whom is it offered? To Whom is it offered? we say in answer, Christ. In addition, the sacrifice is offered “on behalf of all and for all,” for it is a sacrifice of redemption which is brought for the living and the dead.

According to St. Nicholas Cabasilas, a medieval Orthodox teacher, the Church’s understanding of the Eucharist is, as follows: “In the first place, the sacrifice is not only an enactment or a symbol, but a real sacrifice. In the second, that which is sacrificed is not bread, but the very Body of Christ. In the third place, the Lamb of God was immolated only once and for all times. The Eucharist sacrifice consists not of the real or blood sacrifice of the Lamb, but in the transformation of bread into the sacrificed Lamb” [Commentary on the Divine Liturgy, 32].

According to the Orthodox Church, then, the Eucharist is not just a reminder of Christ’s sacrifice or of its enactment, but it is a real sacrifice. On the other hand, however, it is not a new sacrifice, nor a repetition of the Sacrifice of the Cross upon Golgotha. The events of Christ’s Sacrifice – the Incarnation, the Institution of the Eucharist, the Crucifixion, Resurrection and Ascension into Heaven, are not repeated during the Eucharist, yet they become a present reality. As one Orthodox theologian has said, “During the Liturgy we are projected in time to that place where eternity and time intersect, and then we become the contemporaries of these events that we are calling to mind” [P. N. Evdokimov, L’Orthodoxie, p. 241]. Thus the Eucharist and all the Holy Liturgy is, in structure, a sacrificial service.

How all this takes place is a mystery. As Metropolitan Philaret of Moscow wrote in his Longer Catechism, concerning the changing of the bread and wine into the Body and Blood of Christ, “this none can understand but God; but only this much is signified, that the bread truly, really and substantially becomes the very true Body of the Lord, and the wine the very Blood of the Lord.” Furthermore, as St. John of Damascus states, “If you enquire how this happens, it is enough for you to learn that it is through the Holy Spirit…. We know nothing more than this, that the Word of God is true, active and omnipotent, but in the manner of operation unsearchable” [On the Orthodox Faith, IV, 13].

Concerning the Communion itself, in the Orthodox Church both laity and clergy always receive Communion of both the Body and Blood of Christ. The Communion is given to the laity in a spoon containing a small piece of the Holy Bread together with a portion of the wine, and it is received standing. A strict fast is observed, usually from the night before, and nothing can be eaten or drunk after waking in the morning before Communion. As a theologian of the Church has well put it, “You know that those who invite the Emperor to their house, first clean their home. So you, if you want to bring god into your bodily home for the illumination of your life, must first sanctify your body by fasting” [Gennadius, Hundred Chapters].

After the final blessing of the Liturgy, the faithful come up to kiss the Hand Cross held by the Priest and those who have not communed receive a small piece of bread, called the Antidoron, which, although blessed, was not consecrated, having been taken from the same bread(s) from which the Lamb was taken in the Proskomedia. This bread is given out as an expression of Christian fellowship and love (agape).