The Great­martyr George, for his manliness and for his spiritual victory over the torturers, who could not force him to renounce Christianity, and likewise for his wonderworking assistance to people in danger is additionally called the "Victory-bearer".Neither the Great Horologion nor the Prologue, nor the Church's services to St George, mention the most popular story of St George, his slaying of a dragon.
admin | 05 May 2006 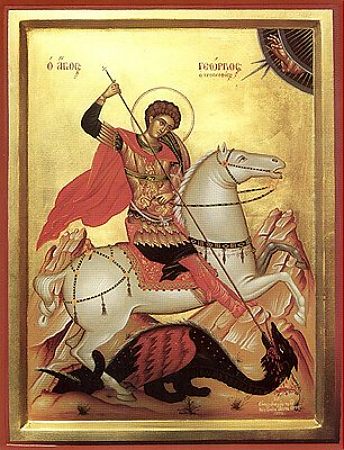 The Great­martyr George was the son of wealthy and pious parents, who raised him in the Christian faith. He was born in the city of Beirut (in antiquity ­ Berytos), at the foot of the Lebanese mountains.

Having entered military service, the Great­martyr George stood out among the other soldiers by virtue of his mind, valor, physical strength, military bearing and beauty. Having quickly attained to the rank of millenary [Translator’s note: tribunus militum, an officer in the Roman army in charge of a thousand or more soldiers], Saint George became a favorite of the Emperor Diocletian.

Diocletian was a talented ruler, but a fanatical adherent of the Roman gods. Having set for himself the goal of reviving dying paganism in the Roman Empire, he went down in history as one of the most cruel persecutors of Christians.

Once, when he heard in a court the inhuman sentence concerning the annihilation of Christians, Saint George became inflamed with compassion for them. Foreseeing that sufferings were also awaiting him, George distributed his property to the poor, freed his slaves, appeared before Diocletian and, having revealed himself as a Christian, denounced him for cruelty and injustice. George’s speech was full of powerful and convincing objections against the imperial order to persecute Christians.

After futile persuasions to deny Christ, the Emperor ordered that the saint be subjected to various tortures. Saint George was confined in a dungeon, where they placed him supine on the ground; his legs they confined in stocks, and on his breast they placed a heavy stone. But Saint George manfully endured the sufferings and glorified the Lord. Then George’s torturers began to refine their cruelty. They beat the Saint with ox­hide whips, subjected him to the wheel, threw him into quicklime and forced him to run in shoes with sharp nails inside. The holy Martyr endured everything patiently. Finally, the Emperor ordered the Saint’s head to be cut off. Thus, the holy sufferer departed unto Christ in Nicomedia in 303 AD.

The Great­martyr George, for his manliness and for his spiritual victory over the torturers, who could not force him to renounce Christianity, and likewise for his wonderworking assistance to people in danger is additionally called the “Victory-bearer”. The relics of Saint George the Victory-bearer were placed in the Palestinian city of Lydda, in the church that bears his name, while his head was preserved in Rome, in the church that is also dedicated to him.

On icons, the Great­martyr George is depicted sitting on a white horse and smiting a dragon with a spear. This depiction is based on tradition and relates to the posthumous miracles of the holy Great­martyr George. It is said that not far from the place where Saint George was born in the city of Beirut, in a lake lived a dragon which frequently devoured people of that locale. What kind of beast that was, a python, crocodile or large lizard is not known.

In order to appease the wrath of that dragon, the superstitious inhabitants of that locale began regularly by lot to give up to it a youth or maiden to be eaten. Once the lot fell on the daughter of the ruler of that locale. They took her to the shore of the lake and tied her up where she began to await in terror the appearance of the dragon.

When the beast began to approach her, suddenly a radiant youth appeared on a white horse who smote the dragon with a spear and saved the maiden. This youth was the holy Great­martyr George. By such a miraculous appearance he caused the extermination of youths and maidens to cease in the environs of Beirut and converted to Christ the inhabitants of that country, who until then were pagans.

One may suppose that Saint George’s appearance on a horse to defend the inhabitants from a dragon and likewise the description in his life of the miraculous reviving of a farmer’s only ox, served as the cause for honoring Saint George as a protector of animal husbandry and as a defender from predatory beasts.

In pre­revolutionary times, on the day of Saint George’s commemoration, the inhabitants of Russian villages, for the first time after the cold winter, would drive their animals out to pasture, after having performed a moleben to the holy Great­martyr along with the sprinkling of homes and animals with holy water.

The Great­martyr George is a protector of the army. The depiction of George the Victory-bearer on a horse symbolizes victory over the devil ­ the ancient serpent. This depiction was included in the ancient coat of arms of the city of Moscow.

Neither the Great Horologion nor the Prologue, nor the Church’s services to St George, mention the most popular story of St George, his slaying of a dragon. Though many icons of the Saint show him mounted on horseback, slaying a dragon with a spear, the story is thought by many to be legendary, and the dragon in the icon symbolic.

Source: Lives of the Saints