Holy Synod of OCA issues Affirmation of the Mystery of Marriage

On Tuesday, July 2, 2013, the members of the Holy Synod of Bishops of the Orthodox Church in America released the following “Affirmation of the Mystery of Marriage”: 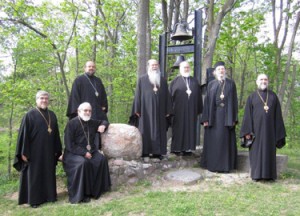 At the Tenth All-American Council of the Orthodox Church in America, held in Miami, Florida in July 1992, the Holy Synod of Bishops issued a document titled, “Synodal Affirmations on Marriage, Family, Sexuality, and the Sanctity of Life.” The Affirmations were issued after a lengthy process of study and discernment with the intention of addressing issues that, even in our time, continue to be a source of debate and division within American society.

The first section of the Affirmations, titled, “The Mystery of Marriage,” reads as follows.

“God creates human beings in His own image and likeness, male and female. He declares human life, with all that He makes, to be ‘very good’ (Genesis 1:27-31).

“God wills that men and women marry, becoming husbands and wives. He commands them to increase and multiply in the procreation of children, being joined into ‘one flesh’ by His divine grace and love. He wills that human beings live within families (Genesis 1:27; 2:21-24; Orthodox Marriage Service).

“The Lord Jesus blessed marriage in which the ‘two become one flesh’ when, by His presence with His mother Mary and His disciples at the marriage in Cana of Galilee, He revealed His messianic glory in His first public miracle, evoking for the first time the faith of His disciples (Genesis 2:24; John 2:1-11)….

“Christ’s apostles repeat the teachings of their Master, likening the unique marriage between one man and one woman to the union between Christ and His Church which they experience as the Lord’s very body and His bride (Ephesians 5:21-33; 2 Corinthians 11:2).

“While condemning those who forbid marriage as an unholy institution, along with those who defile marriage through unchastity (1 Timothy 4:3, Hebrews 13:4), the apostles commend as ‘the will of God’ that Christians, as examples for all human beings, abstain from unchastity [porneia] and know how to marry ‘in holiness and honor, not in the passion of lust like heathen who do not know God.’ They insist that ‘whoever disregards this [teaching] disregards not man but God, who gives His Holy Spirit’ to those who believe (1 Thessalonians 4:3-8).

“Husbands are commanded to be the heads of their wives as Christ is the head of the Church. They are called to love their wives as their very selves, as Christ loves the Church, giving themselves in sacrifice to their brides as to their own bodies. And wives are called to respect and reverence their husbands as the Church devotes herself to Christ with Whom she too, like the wife with her husband, is ‘one flesh’ (Ephesians 5:21-33; Orthodox Marriage Service).

“The ‘great mystery’ of marriage (Ephesians 5:32) is the most used image and symbol in the Bible for God’s relationship with His People in the Old and New Testaments where the Lord is the husband and His people are His wife—so often unfaithful and adulterous (cf. Hosea, Jeremiah, Ezekiel, Song of Songs, Corinthians, Ephesians, et. al.). And the ultimate union between the Lord and those saved by Christ for eternal life in God’s kingdom by the indwelling Holy Spirit is likened to the communion of marriage (Revelation 21-22).”

In light of the decisions rendered on June 26, 2013 by the Supreme Court of the United States of America with regard to same-sex marriage, we, the members of the Holy Synod of Bishops of the Orthodox Church in America, reaffirm that which had been stated in June 1992, namely that marriage involves the union of one man and one woman, as divinely revealed and experienced in the sacramental life of the Church. As such, the Church does not, and can not, condone or accept marriages apart from those involving one man and one woman who seal their relationship in the all-embracing love of Our Lord, Jesus Christ, together with the Father and the Holy Spirit.

We exhort the clergy and faithful of the Orthodox Church in America not to have fear or anxiety in the face of the decisions of the civil authorities of our lands, but to bear witness to the timeless teachings of Christ by striving for purity and holiness in their own lives, by instructing their families and communities in the precepts of the Holy Gospel, and by placing their trust in our Lord Who “has overcome the world.”