On 30 January 2013, His Holiness Patriarch Kirill of Moscow and All Russia chaired the first in 2013 session of the Holy Synod of the Russian Orthodox Church. The session is being held at the Synod’s Hall of the Patriarchal and Synodal residence in St. Daniel’s Monastery. 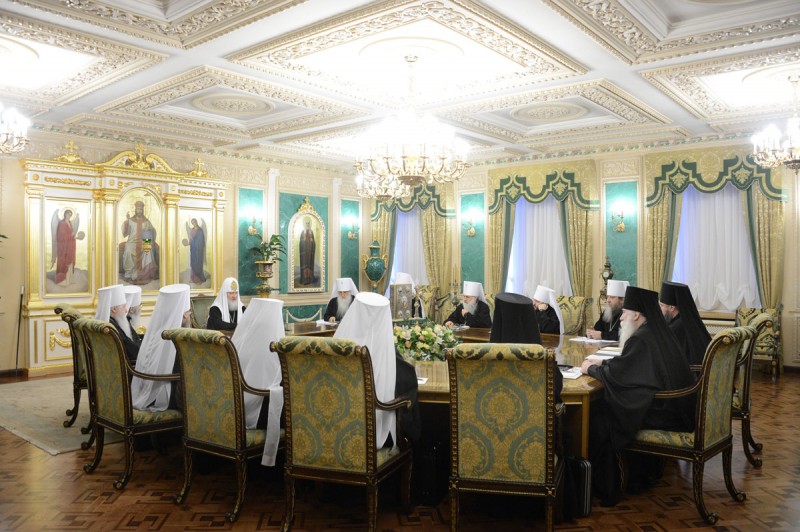 The Primate of the Russian Orthodox Church welcomed the Holy Synod’s members and presented main items on the agenda.

“I greet all members of the Holy Synod, both permanent and temporary ones. We are opening the first session in the New Year of 2013. I congratulate you all with the feasts we celebrated and express my hope that the Holy Synod will work as actively as in the last year.

“Last year we had to take very important decisions on the election of bishops for the newly establishes dioceses. I will speak about it in detail at the forthcoming Bishops’ Council.

“We can see the results of these important decisions in positive changes that are taking place in the newly established dioceses, such as the newly opened churches and the increased number of ordinations. The changes are also seen in education and in missionary activities.

“I hope that sessions of the Synod in 2013 would be marked, God graciously willing, by important decisions aimed at the development of church life and improvement of the pastoral and missionary work which the Russian Orthodox Church is doing for the good of people and for salvation of human souls.

“As to the present session, the preparation for the Bishops’ Council is main item on the agenda. We ought to adopt its rules of procedure, draft agenda and composition of its working bodies, to nominate a secretary and present at least two important documents to the members of the Council. These are Regulations for material and social support of priests, church workers and staff of religious organizations of the Russian Orthodox Church; and a draft of alterations and amendments to the Statute. The first document was adopted by the last Bishops’ Council and is being implemented. However, to make the Regulations permanent we will consider some amendments and then present it to the Bishops’ Council.