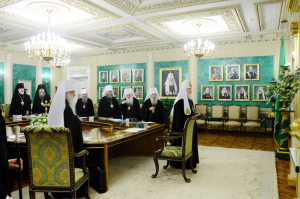 On 16 July 2013, the Holy Synod of the Russian Orthodox Church, chaired by His Holiness Patriarch Kirill of Moscow and All Russia, met for its concluding meeting in the spring/summer session.

The participants in the meeting adopted the Patriarchal Message to Archpastors, Clergy, Monastics and Laypeople on the occasion of the 1025th Anniversary of the Baptism of Russia.

The Synod considered and approved the document “On External Mission of the Russian Orthodox Church at Present”, prepared by the joint working group of the Department for External Church Relations, Synodal Missionary Department and the Moscow Patriarchate’s Administration for Institutions Abroad.

Having heard the report by Archbishop Yevlogiy of Vladimir and Suzdal, the Holy Synod resolved to establish the new Murom and Alexandrov dioceses.

Having heard the report by Archbishop Yevgeniy of Vereya, chairman of the Education Committee, containing proposals for optimizing work of the higher theological educational institutions, the Synod commissioned the Education Committee, among other things, to organize regular courses of professional development for professors of theological educational institutions.

The Holy Synod of the Russian Orthodox Church made a decision to transform the Patriarchal Metochion in the former St Andrew’s Monastery in Moscow, with its Churches of the Resurrection of Christ, of St John the Theologian, and of St Andrew Stratelates, into the Stavropegic Monastery of St Andrew. Bishop Feofilakt of Dmitrov, administrator of Moscow’s South-Western vicariate, was appointed abbot of the newly established monastery.

The Synod also resolved to open the Stavropegic Convent of St Alexis in Moscow and nominated Sister Ksenia (Chernega), who has recently taken the lesser schema, its hegumennes.

Having heard His Holiness Patriarch Kirill’s report on dioceses and parishes abroad, the Synod resolved:

to release Bishop Leonid of Argentina and South America from his duties of representative of the Patriarch of Moscow and All Russia to the Patriarch of Alexandria and to appoint to this post Rev. Viktor Kulaga, cleric of the Bobruysk diocese.

The Holy Synod established one more commemoration day of St Matrona of Moscow – the 8th of March (New Style), the day of the finding of her relics.

The participants in the meeting approved texts of prayer services, dedicated to St John the Archbishop of Shanghai and San Francisco and the Wonderworker, to the holy hieromartyr Hilarion (Troitsky), Archbishop of Vereya, and to St Simeon of the Pskov Caves.

The Holy Synod approved the decisions made by the Supreme Church Council earlier in 2013, and considered a number of issues of external church activity.