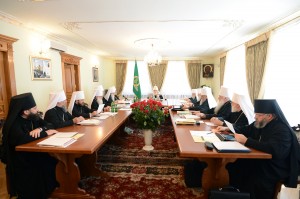 On July 26, 2012, the Holy Synod of the Russian Orthodox Church met for a regular session at the Kiev Laura of the Caves. The session was chaired by His Holiness Patriarch Kirill of Moscow and All Russia.

Summoned for the summer session of the Holy Synod were Metropolitan Nifont of Lutsk and Volhyn, Metropolitan Nikon of Ufa and Sterlitamak, Metropolitan Pavel of Ryazan and Mikhailov, Bishop Tikhon of Maikop and Adygeia, Bishop Aristarch of Kemerovo and Novokuznetsk.

Patriarch Kirill made a report on his official visit to the Orthodox Church of Cyprus which took place from June 8 to 11, 2012. He was accompanied by Metropolitan Hilarion of Volokolamsk and Bishop Sergiy of Solnechnogorsk, head of the Administrative Secretariat. On June 10 and 11, Patriarch Kirill and Archbishop Chrysostomos of Cyprus celebrated the Divine Liturgy at the church of St. Sophia and in the church of St. Barnabas in Nicosia. The primates of the two Churches discussed prospects for bilateral cooperation in the sphere of pilgrimage and common Orthodox efforts. During his visit to Cyprus, Patriarch Kirill met with President D. Christofias.

The Holy Synod expressed gratitude to Archbishop Chrysostomos and hierarchs of the Church of Cyprus for the hospitality accorded to the delegation of the Moscow Patriarchate.

The Synod underscored the importance of the talks held by the heads of the two Churches for further development of bilateral cooperation and consolidation of Orthodox unity.

Patriarch Kirill also made a report about his meeting with Patriarch Theodore of Alexandria and All Africa. They met on July 24 and 25, 2012, in the course of Patriarch Theodore’s unofficial visit to Russia during which he visited the Patriarchal and Synodal Administrative and Cultural Center in southern Russia.

Metropolitan Hilarion made a report on the visit made in June, 2012, by a delegation of the Presidential Council for Cooperation with Religious Organizations’ working group for contacts and cooperation with the People’s Republic of China in the religious sphere. On June 19, the Russian-Chinese group for contacts and cooperation in the religious sphere met for the 2nd consultations to discuss the present situation of religious organizations in Russia and China and a number of issues concerning the status of Orthodoxy in China. The Synod expressed satisfaction at the development of dialogue with state authorities in China concerning cooperation between the Orthodox believers in the two countries and the present work of the Chinese Autonomous Orthodox Church.

Metropolitan Hilarion also made a report on the 8th meeting of the joint Russian-Iranian commission for dialogue ‘Orthodoxy-Islam’. The meeting took place on June 26 and 27, 2012, in Moscow and was devoted to the theme ‘Religion and Human Rights’. The Synod expressed satisfaction at the results of the meeting and deemed it important to continue dialogue with the Muslim community in Iran.

The Synod heard the report by Metropolitan Hilarion on the work of the Commission for Old Belief Parishes and Cooperation with the Old Belief Community and approved it.