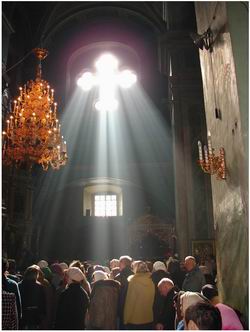 Holy week in the Eastern Orthodox Church institutes
the sanctity of the whole calendar year of the Church. Its center of
commemorations and inspiration is Easter wherein the glorified
Resurrection of Jesus Christ is celebrated. Every Sunday is dedicated
in the Eastern Orthodox Church to the Resurrection of the Lord. One
hundred days also are dedicated to Easter, 50 before it for
preparation, and another 50 after it for commemorating the
glorification of the Lord. Easter is considered the “Feast of Feasts.”

The 50 days before Easter, known as a part of the period of Triodion (“three”
+ “odes”) are the period for strengthening faith in the Lord. The means
are well-known to people of spiritual experience. They are repentance, which means to change from indifference to full devotion; prayer, which is considered the soul of faith, and through which faith emerges from theory into life, and self-control, which
governs our relationships with our fellowman. These means are practical
indicators of our vivid faith in God. With this preparation we are
invited to enter the sanctuary of Holy Week, not as spectators, but as
participants in the commemoration and enactment of the divine Acts that
changed the world. A Christian must always be well-trained and
well-armed to fight against those who try to corrupt his spirit and
take away his freedom. The Christian must keep his own spiritual
kingdom intact and his freedom of religion and uprightness vivid in
order to be a part of the Kingdom of God, where the compassions of the
Lord and His Resurrection will be experienced. There is no other place
where the Kingdom of God can be expanded except the heart of man; and
there is no other gate whereby we can enter the Kingdom but that of
“repentance.” This was the proclamation of the new era of Jesus Christ,
who said, “Repent, for the kingdom of heaven is at hand” (Matthew 3:2).

The 50 days which follow Easter are signified by the Pentecostarion (Gr. Pentikonta, 50). They
are dedicated to the spiritual enjoyment of the participants in the
deep belief that Almighty God is our Companion in our everyday life and
thoughts. It starts with the celebration of the Lord’s Resurrection.
During this period, the Church of Christ, which is His Mystical Body,
was instituted and strengthened. His disciples and Apostles were the
witnesses of the appearances of the Risen Lord; they were the
recipients of the Holy Spirit, Who changed completely their attitude of
fear, Who made the Apostles into piercing heralds and ambassadors of
the New Message of salvation in the name of Christ, the Savior. This
was an experience, teaching and inspiration they handed down as the
treasure of the Christian Faith. Christians are called to commemorate
the same divine Events and to enact them in their hearts and minds,
based on the realization that “Christ is Risen.”

The entire Christian confession is contained in the
words “Christ is Risen.” St. Paul, referring to this fact, clearly and
emphatically says: “If Christ has not been raised, then our preaching is in vain and your faith is in vain” (1
Corinthians 15:14). This is the reason why, from the beginning, the
Church of Christ set forth as the center of its worship and faith the
Resurrection of its Lord. From the earliest days after Pentecost the
Apostles designated “the first of the Sabbath” of each week for the
remembrance, of the Resurrection of our Lord. This day was called the
“Lord’s Day” in the Revelation of John, who said: “I was the Spirit on the Lord’s day” (1:10). It
was this tradition which the writers and hynmologists of the Orthodox
Church had in mind when they wrote hymns and odes for eight consecutive
Sundays (Lord’s days) having for their subject the Resurrection of
Christ as the basic belief of redemption and of worship. The fifth
article of the Ecumenical Creed of Faith, the Nicene Creed, refers to
this belief, as well.

The Resurrection of Christ, in relation to the
Crucifixion, constitutes the essence of the Christian Easter, which is
the center of the celebrations of worship of God in the Orthodox
Church. Herein will be presented the events and services of the Passion
Week recorded in the New Testament as they exist in the Eastern
Orthodox Church today. The Passion Week, from the triumphant entrance
of our Lord into Jerusalem until His Resurrection, contains a series of
events in the life of Christ the Savior linking prophecy with its
fulfillment.

Most viewed articles
Hallowed Be Your Name: Some Grammar and A Reflection227
Church Dating 1,600 Years Back Discovered in Turkey’s Priene Ancient City146
How to Read the Bible121
Seven-day celebrations dedicated to the Saint who helped Bucharest during plague epidemic begin on Thursday91
Patriarch Kirill Encourages the Media to Report Proper and Adequate Information about the Church79
Holy Intercession Church in Glen Cove, NY, Celebrates its 70th Anniversary78
Since the Start of the Pandemic Moscow Priests Have Made Over 4,000 Visits to Patients with COVID-1953
Words from St. Isaac of Syria43
Archbishop Peter of Chicago and Mid-America in an interview to Poltava Diocese’s press service reveals interesting moments in the life of St John (Maximovich)21
Most popular authors
Pravmir.com team231
Archpriest Michael Gillis227
Dilan Pamuk146
Archpriest Lawrence Farley121
Aurelian Iftimiu91
Archpriest Stephen Freeman43