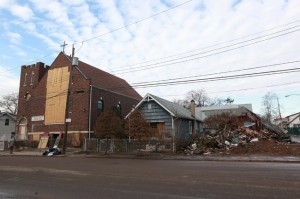 Hurricane Sandy flooded and battered St. George Malankara Orthodox Church of India in New Dorp, Staten Island, ruining its basement, windows and doors. Yet, when its vicar contacted theFederal Emergency Management Agency to ask for a grant to help with the estimated $150,000 rebuilding cost, he said he got a clear answer: No.

“FEMA said that they considered the church a business, so they offered us a loan,” the Rev. Alex K. Joy said in an interview about a month after the storm. “But we don’t want a loan. We have 400 members, 90 families. In this situation, we need some assistance.”

A broad range of private nonprofit organizations qualify for federal disaster assistance grants, including zoos, museums, performing arts centers and libraries. Houses of worship, however, are not on the list, even though in recent years the federal government has ruled that some religiously affiliated institutions like schools and hospitals can get grants.

An effort is under way to change that, led by several Jewish organizations, including the Union of Orthodox Jewish Congregations of America and the American Jewish Committee. Last month, Senator Joseph I. Lieberman, independent of Connecticut, introduced an amendment to the multibillion-dollar Hurricane Sandy recovery appropriations bill that would explicitly place houses of worship on the list of qualified organizations. But because of an unrelated bipartisan deal meant to ease the bill’s passage, that amendment was locked out of consideration.Mr. Lieberman’s tenure in the Senate ended this week, but Nathan Diament, the executive director of public policy for the Institute for Public Affairs at the Orthodox Union, said he was continuing to work with other lawmakers to add the amendment to the bill before it came again before Congress.

“Houses of worship should not be discriminated against and excluded from getting assistance on the same terms as other eligible nonprofits,” he said.

Mr. Diament has also been meeting with officials from the Homeland Security Department and other federal agencies to see if the change can be made without legislative action. FEMA regulations are silent on the matter of houses of worship, so a bureaucratic decision may be all that is required, he added.

Yet the issue is controversial, because the constitutional separation of church and state generally bans the use of tax money to build religious institutions. Dena Sher, legislative counsel for the American Civil Liberties Union, said the organization had “serious concerns” about the effort to change the policy and was monitoring the situation.

“To rebuild houses of worship is a form of compelled support for religion, which is exactly what the First Amendment is designed to protect against,” Ms. Sher said. “We understand and identify with the serious difficulties everyone is facing, but we can’t let this misfortune be used as a premise to erode these bedrock principles.”

Barry W. Lynn, the executive director of Americans United for Separation of Church and State, said, “I think that challenges would be inevitable if you started to reconstruct religious buildings with federal or state tax dollars.”

Marc D. Stern, the general counsel of the American Jewish Committee, disagrees. In a letter to senators last week, he argued that aid “distributed under a neutral program of storm relief” could be made available constitutionally in part because “there is a strong societal interest in aid to all who have suffered damage.”

Though the outcome is uncertain, UJA-Federation of New York and several other Jewish organizations have been urging damaged synagogues to apply for FEMA rebuilding grants before coming deadlines, in case the rule changes. There appears to be less of an organized push by institutions affiliated with other religions, though the United States Council of Catholic Bishops is also supportive of the change, a representative said. The new financing rules, if they are put in place, would apply to all houses of worship, regardless of religion.

In New York, about 40 damaged synagogues will most likely apply for grants; in New Jersey, about a dozen, Mr. Diament said.

There is no clear count of churches. Some of the most damaged, like the Episcopal churches along the New Jersey barrier islands, carry comprehensive insurance and may not need the extra help, said Cynthia McFarland, a spokeswoman for the Episcopal Diocese of New Jersey.

Dennis Bellars, the senior warden of St. Elisabeth’s Chapel-by-the-Sea in Ortley Beach, N.J., said, “We have 100 percent replacement value through the church’s insurance.” The chapel was washed away in the storm, and when Mr. Bellars called FEMA, he said, he was told that the owner of the church, the local diocese, would have to submit the application.

The ban on FEMA grants for houses of worship is not total: churches and synagogues may apply for reimbursement for social services they provided, including homeless shelters, preschools or feeding programs. Houses of worship can also qualify for low-interest Small Business Administration loans.

Some of the clergy members applying for disaster grants said they understood the complexity of the issue, and were not counting on the money.

Father Joy, of St. George Malankara, who said he spoke with President Obama about the issue during his visit to Staten Island in November, said Friday that his church reopened for Christmas with the help of private donations alone. (The church did not have insurance to cover the damage.) And Rabbi David S. Bauman of Temple Israel of Long Beach, N.Y., who said he spoke with the president about FEMA financing at the White House Hanukkah party in December, said he was reaching out to as many donors as he could for help with his temple’s $5 million in damage.

“I’m frustrated,” Rabbi Bauman said, “but I don’t have harsh feelings toward the policy, because I understand it.”

Rabbi Marjorie Slome of the West End Temple in the Rockaways section of Queens, which also suffered extensive storm damage, said she planned to submit her grant application on Dec. 31, with the help of the Jewish Community Relations Council of New York. Private donations and insurance payments had so far come up short, she said.

“I’m hopeful that the government will understand it’s a one-time thing, that our goal is not to blur the separation of church and state,” Rabbi Slome said. “I understand that it is a tenuous line to walk, but our synagogue is really going to need help in being able to open its doors again.”